With only twenty-two days left until #4 makes his/her appearance, I’ve been slowing down while at the same time trying to get many things accomplished…

Last weekend was our annual Easter Feast for which we cooked Turkey and Ham as well as several sides, vegetarian dishes, and experimental gluten free dishes! About 35 people attended. Thankfully they came in two waves and the weather was lovely so we were able to open the patio doors and flow in and out of the house as well as give the children free reign in the backyard…

The children are always enthusiastic helpers and I think W ate all day! At least every time he passed me he had something to eat in his hand.. 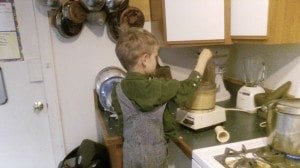 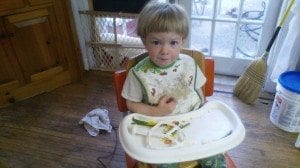 Su loads the potatoes into the crockpot! 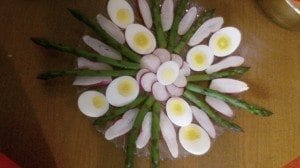 With that celebration finished I am pushing on into planting the garden, doing some badly needed organizing and working on school plans for next “year”. In reality we will move to a full school schedule after the 29th Annual Virginia Homeschool Convention in early June and I’m looking forward to adding in some things we’ve wanted to do that haven’t been feasible while F was doing his preschool program.

I’m also trying to make an inventory of the pantry and freezers to make things easier for S and my friend, L who is coming to help when #4 (also known as Wiggles)appears.

The weather has been lovely and things are getting done, so although the time appears short I think most of it should be done in time!