Advent in Action: The Wreath and the Creche

Posted on December 3, 2011 by Kyndra Steinmann

One of the things that makes the church calendar an important part of our lives are the rituals and traditions that we bring out at different times of the year. On the Saturdays of Advent this year I am going to post on some of the traditions that we enjoy and look forward to season after season.

Yesterday I finally got the Advent Wreath made. I really should have done it last weekend since Advent started last Sunday, but between the two older children having a stomach bug and a complete unwillingness on my part to do anything that resembles shopping on the weekend after Thanksgiving it didn’t get done.

For some reason I had a very hard time finding appropriately colored candles. I could have gone to a Christian bookstore and probably found some but I’m not a big fan of the ones around here and try not to spend money there. I did find some at Walmart but they were scented which spells instant headache for me so that was “no go”. Finally on Wednesday I found what I needed at a craft store.

The greens had been used at the altar at church on Sunday, and yesterday after the evening chores were done the children sat at the table and I did this. 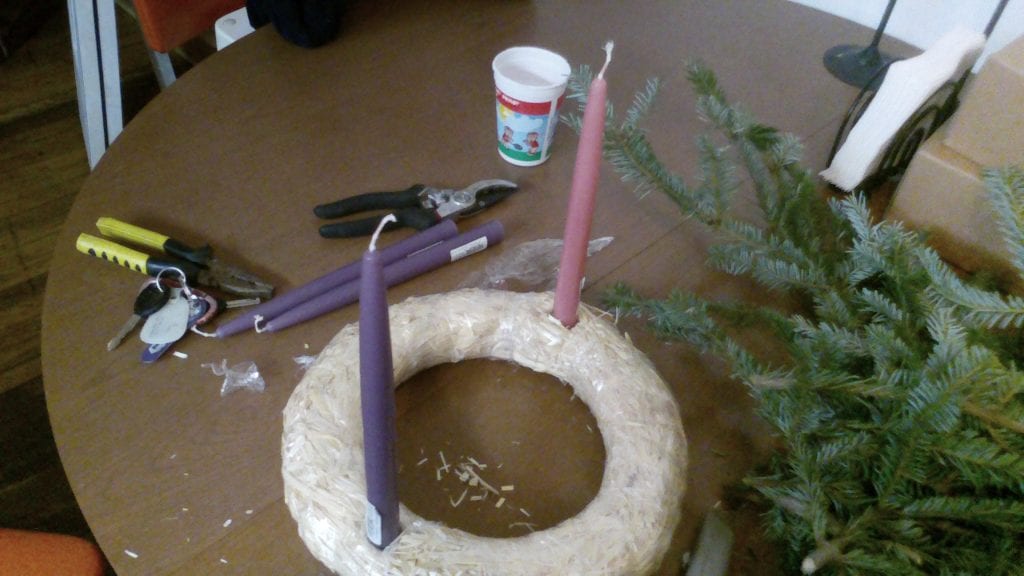 I prefer a straw form, and just make holes in it for the candles with a utility knife. 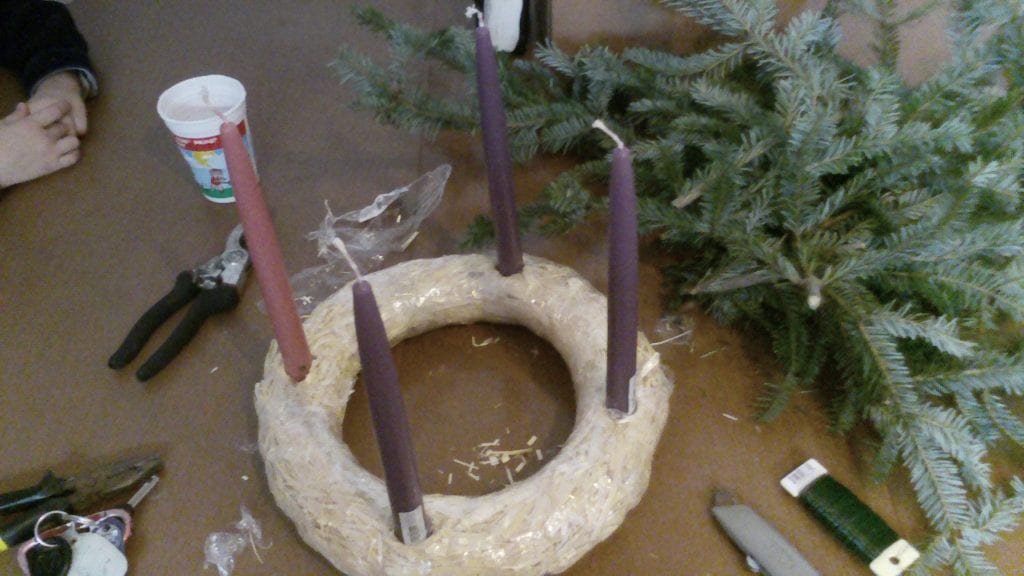 The four candles are: 1 (purple) Prophecy or Hope, 2 (purple) Bethlehem or Preparation, 3 (pink) Shepherds or Joy, 4 (purple) Angels or Joy

Then I used florist wire to secure the evergreen to the wreath form. Traditionally the candle in the middle is lit on Christmas Day and is usually a white pillar candle. I decided to use a silver one instead because I thought it was prettier that way. 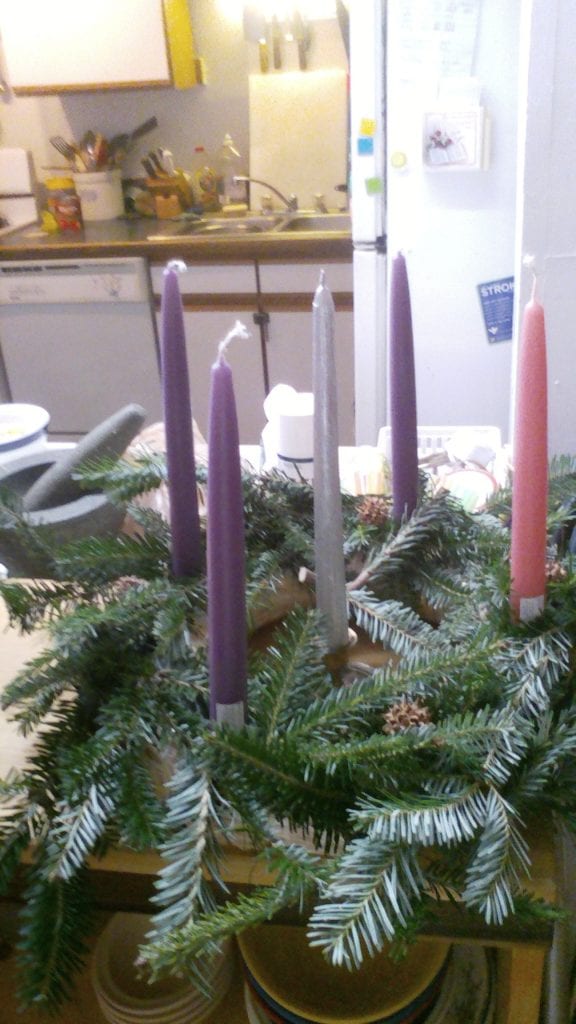 On Sunday we will light the first two candles and discuss what they symbolize as well as reading some Scripture and singing together.

I had a few greens left over so they went into the creche and onto the window sashes. 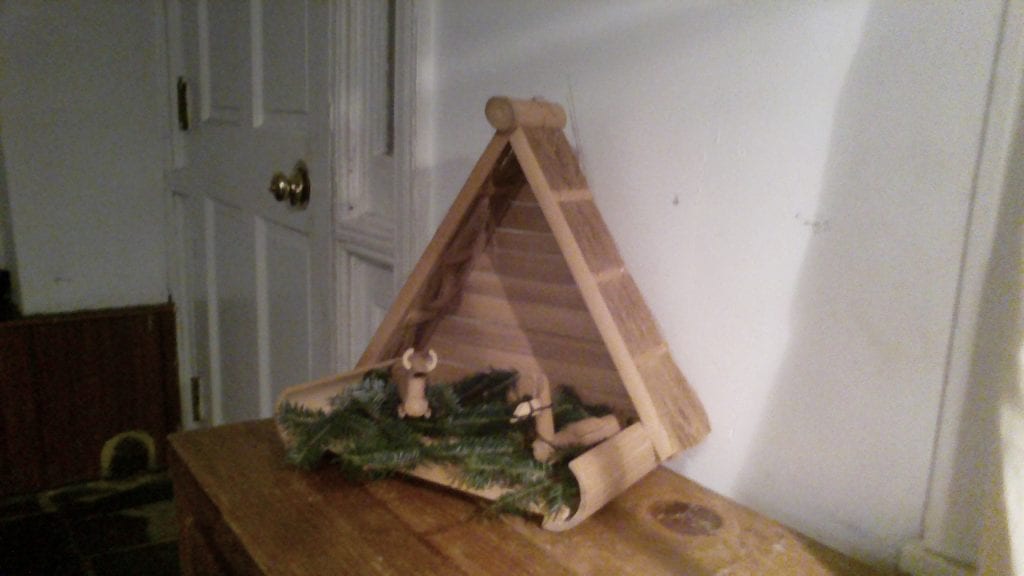 The cow and the donkey wait in the empty stable.

In the past I’ve put everyone but the Christ Child into the creche at the beginning of advent but this year I thought we would try moving a few of them in at a time and discussing and reflecting on the different roles played by the Shepherds, Angels etc.

The children are quite drawn to it. 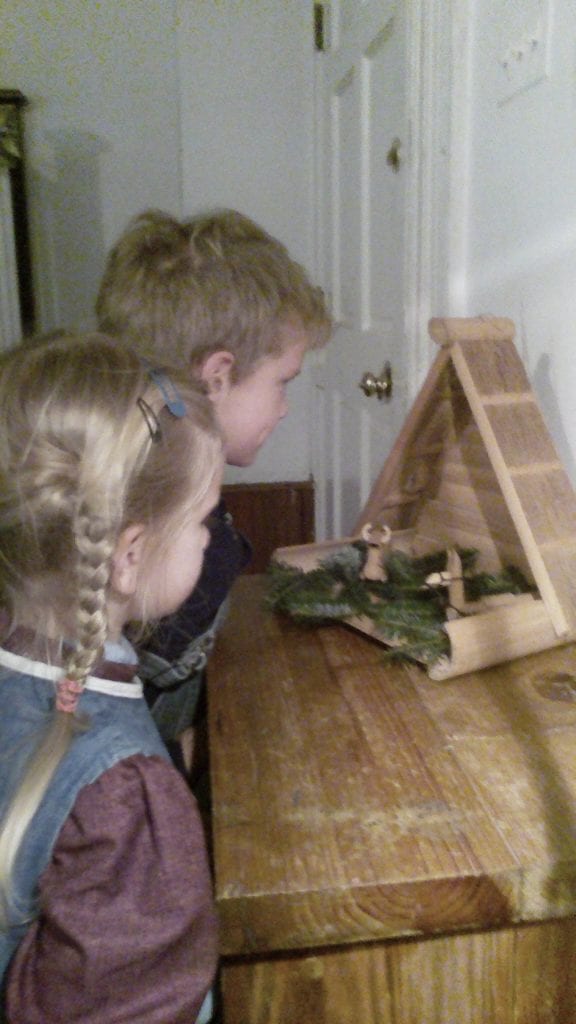 The animals waiting pariently on their bed of greenery I hope will help the children to grasp some of the anticipation of these four weeks.