An Outing With Two Bills

Posted on December 5, 2012 by Kyndra Steinmann 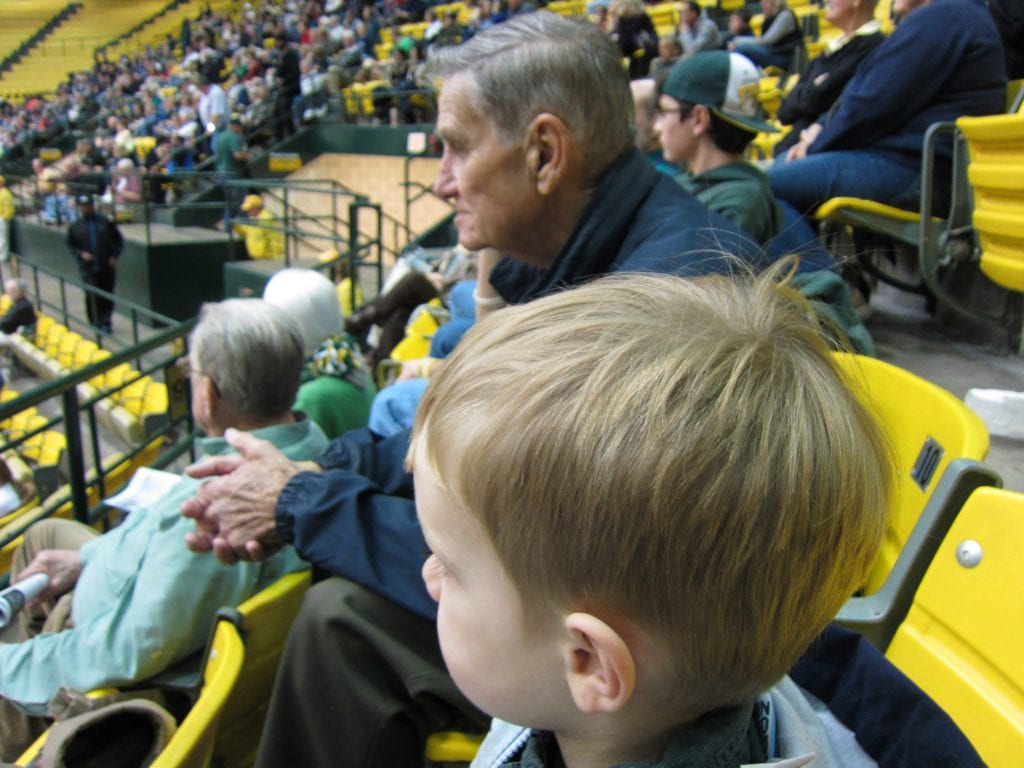 Great-Grandpapa Bill and “Bull” watching a basketball game together!

W (more commonly called Bull) is named after my two grandfathers (William Ferguson and Loren Boydstun). Great-grandpapa Bill lives near us and Bull thinks it is great fun that Grandpapa Bill shares his name!

Grandpapa Bill loves sports, so this weekend I took the two of them (and J) to a basketball game at my alma mater.

We picked up my grandfather at his house and headed out for supper….

The first restaurant we tried was closed.

“No problem, “we decided ,” we’ve got time. Let’s drive across town to the other restaurant owned by the same people.”

That one was full of people in town for holiday festivities.

“Thirty to Forty-five minute wait. ” we were told. Not really an option with a two-year old and a seven-month old in tow.

“Why don’t we just go to the pizza place near the college?” I asked “Good food and fast service, and they are close to the game.”

So we did. Bull and I had some lovely pasta and J ate bits of bread and gnawed on a slice of cucumber.

We got to the game about twenty minutes after it started but that kept it at just about the right length for Bull.

He watched with great fascination and had a blast yelling and cheering whenever our team scored. J,too, thought all the noise and light was great and waved his arms in great excitement!

In the last ten minutes Bull started to fade (it was over an hour past his bedtime and he was just a little too big to curl up in the seat). He sat on my lap and started to drowse off (but I kept yelling in his ear as the game was fairly tight!).

On the ways back to Grand-papa Bill’s house, Bull got concerned because he was just tired (and tidy-minded) enough to think that since Grandpapa Bill was a Bill and he was a Bill they should live together! He kept saying “I need Mama to hold me.” and explaining that he needed to be held before we got to “the Bill house”.

I assured him that he was coming home with me, and he relaxed and went to sleep in his carseat.