Assigning Jobs In Rotation (How-To Use “The Things That Must Be Done!) 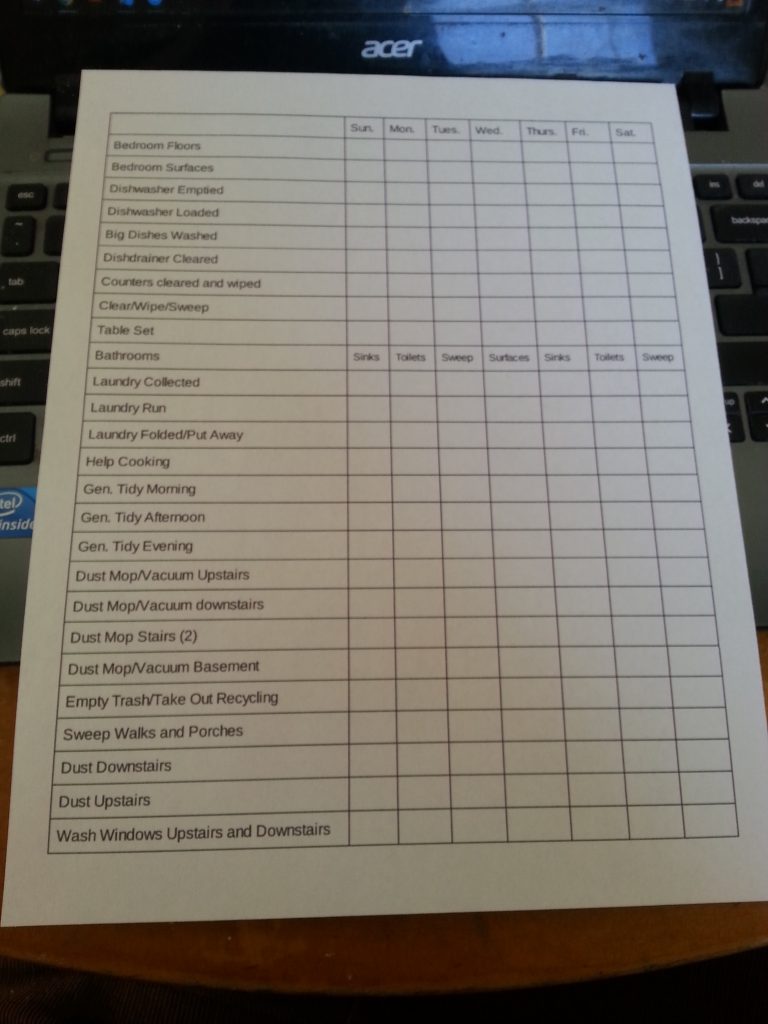 Several years back I started color coding the children. ?At first this was a technique to make it easy for me to tell who had left their stuff out but it quickly became something that made it easier for them as well. ?Even toddlers can learn that their cup is the green one, and so is the bin their mittens go in! They know where to put their stuff away and where to find it without needing to read.

I use that technique on the The Things That Must Be Done! (417 downloads) list. Each child’s initial letter is written in their color, making it easy to scan down the list and find the orange, pink, purple or green writing.

Here’s how I fill it out:

Right now the big children are responsible for the bedrooms. We have one room for boys and one for girls and the biggest kid in the room gets to keep it nice for everyone else. This is a good way for them to practice serving their younger siblings and me (since Daisy still nurses at night I need the floor of the girls’ room clear of tripping hazards).

The little boys may help with some cleaning up, some days Buggle will work on teaching them to make their beds or put away their laundry. I don’t allow them to trash the room by emptying their clothes onto the floor while looking for a specific shirt (for example), but I also don’t allow the big kids to harass them about things they’ve left out.

Generally we don’t have toys in the bedrooms, which makes keeping things neat much easier.

So: pick up any clothes, pull up the duvets, make sure your desk is “cleared to zero” and the room jobs are done. Should take 10-15 minutes. Bedroom squares on the chart get an S and an F so I can mark both of the bedrooms as done. 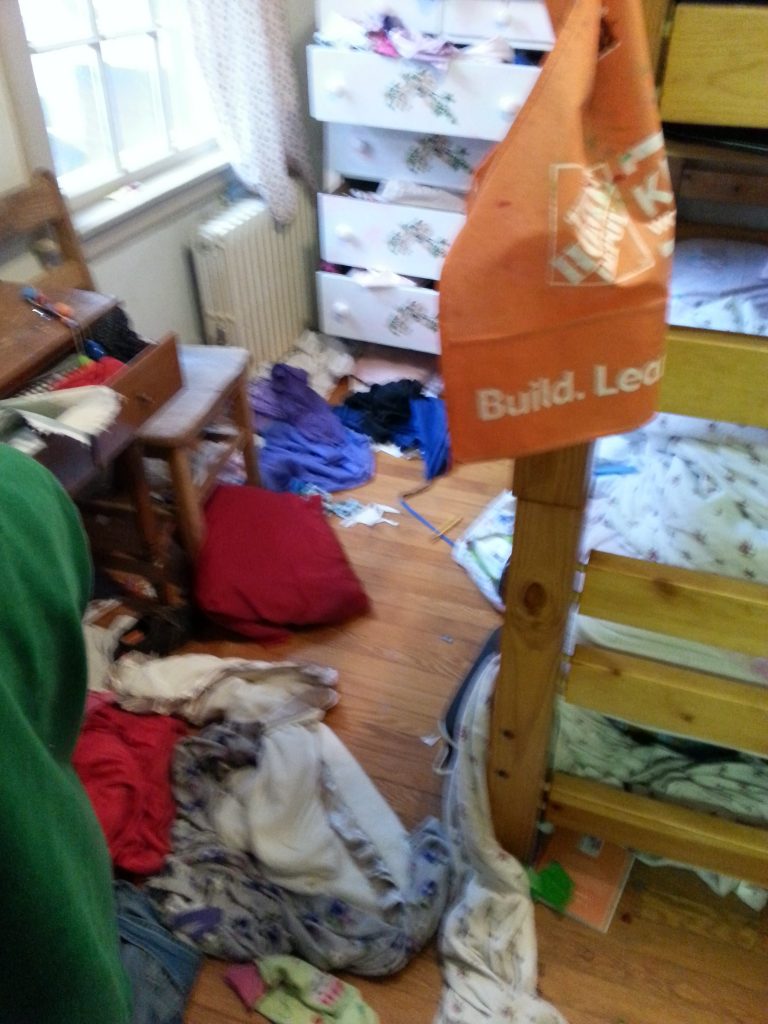 Clear Dishwasher, Clear Dishdrainer, Clear the Table, Wipe the Table, Sweep the Dining Room (Clear/Wipe/Sweep), Set the Table: these jobs belong to the little boys. Bull is the lead (he’s six) and Jack is the learner (he’s 3). ?Bull has been doing these jobs for a while, and knows how to do them well (sweeping is still a bit of a trick) so he now has the chance to exercise some “big brother” skills and learn to lead by example and teach his younger brother. I think this is really important for younger siblings. Everyone expects to learn from the biggest kid and giving the littler ones a chance to learn those same leadership skills is something I have to look for and be sure to facilitate.

Loading the dishwasher and washing the “big dishes” (pots and serving things) alternates between Mouse and Buggle. Whichever of them is not doing this job is in charge of clearing and wiping the counters so the dish person has dishes to do. This is an important learning time for them. They each prefer to be the one in charge and quarreling over how the counter person is putting things in the sink, or working too slowly is not uncommon! I notice that this feeling of being inconvenienced has not yet translated into trying hard on their own counter clearing day not to inconvenience the dish person! Clearly there is some further sanctification needed in this area!

We have one and a half baths and I find it works best to have one child do one cleaning chore in both bathrooms. I alternate Mouse and Buggle and since there are two of them and an odd number of days in the week they each get a chance to do all of the jobs every two weeks. ?Sometime this summer I will probably add Bull into that rotation for certain jobs as well.

Whoever isn’t on loading the dishwasher and washing dishes, runs the laundry. We try to do at least a load a day (I keep our clothes trimmed back to just a few outfits for each child as this reduce the amount of laundry we do (counter-intuitive, I know, but true!). The washer person is responsible to run laundry through the washer and dryer and bring up the dry loads from the basement for me to fold.

The other big kid is supposed to collect the laundry. This again gives them the chance to serve one another either by being sure to have the laundry collected and brought downstairs or by jumping in and collecting the laundry to wash themselves if the other person hasn’t gotten to it yet.

I fold. I like the chance to see what state people’s clothes are in (are the boys completely out of pants without holes?) and gives me a sense of what I need to make sure has been through the wash before Sunday!

Everyone puts away laundry, with the big kids putting away clothes for a younger sibling. Bull does his own and Jack does kitchen towels, bibs etc. since those drawers are easy for him to reach.

This happens one to three times a day and is the only job that will absolutely happen if we are home at all! I walk around the house and sweep up piles of stuff to be put away and we clear the piles. It’s the only thing I’ve found that keeps us from descending into complete chaos. Everyone works until the job is done.

A bunch of stuff only needs to be done once a week. Those jobs get assigned randomly based on who has more schoolwork that week, and other factors. I try to schedule those jobs for the days we don’t go anywhere as well so there is a little more time to complete them.

I really love the way this system. It’s consistent and yet flexible, giving me the ability to stay on track while using routine chores as a time to learn life skills that go far beyond housekeeping! 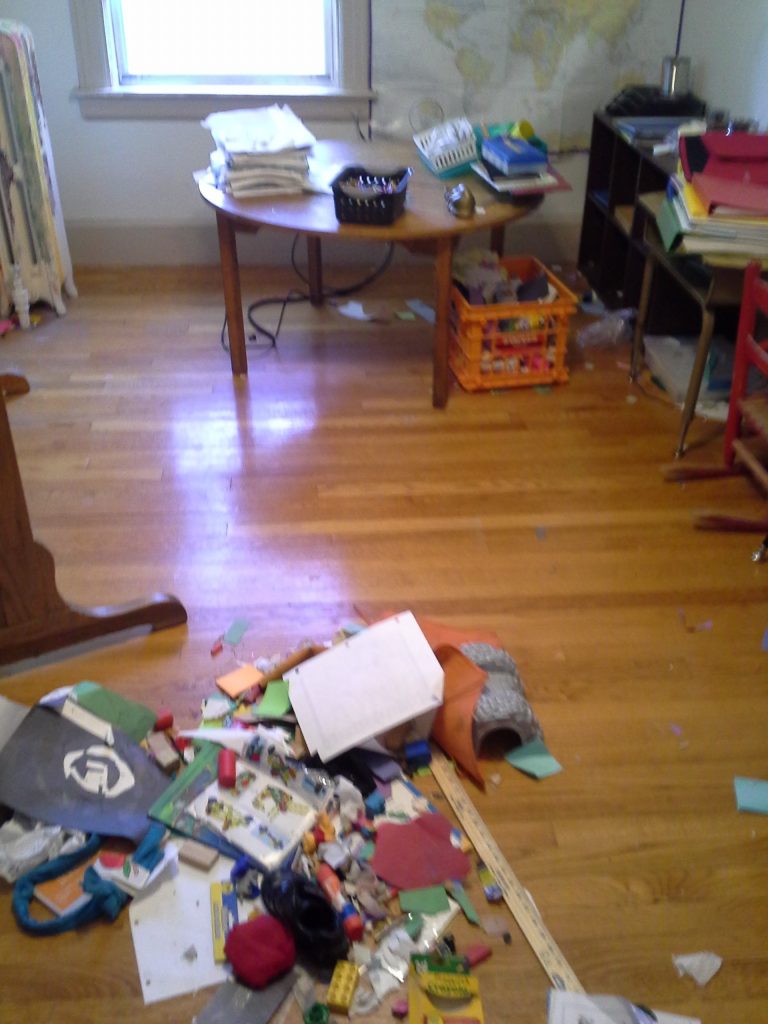 This entry was posted in Housekeeping, Organization, Schedule, Uncategorized and tagged chore charts, chores, housekeeping, planning and organization, Preschooler chores, Printables, The Things That Must Be Done. Bookmark the permalink.