Posted on September 24, 2012 by Kyndra Steinmann

One of the things that I find most difficult as a mother is being consistent with child-training. Sometimes I feel like no matter how much I train on an issue it is not getting better (and may be getting worse) and sometimes there are so many issues that I can’t figure out what to focus on and end up focusing on all of them at once (hyper-focusing?)!. S is very good about stopping me from doing this by reminding me to focus on root problems and let minor things slide.

I need help though. If I say to myself “X is really a problem that I need to deal with” I will do well with it for a day or two but then either become discouraged or get lazy (the “oh things are a little better now I can rest” mindset).

Here’s the thing though- it takes most people about thirty days to learn a new habit and forty-five to sixty days to unlearn an old habit! That means that if I want to replace whining with sweet voices I need to stay on top of it for a month. That is a long time to stay focused on one thing. I need something that will help me stay on track, help me see if we are making progress with an objective measurement, and help the children see that they are learning as well.

I was at a loss for a tool that would do all of this until I remembered the way we charted behavior when I taught at a school for troubled boys. For each class we noted down good and bad behavior with a points system and the boys received good or bad consequences each week based on their total points. That system is a little abstract for preschoolers and a little cumbersome for home use, so I adapted it somewhat to get our current system.

First I sat down and thought about what areas we needed to train in, what things were likely root causes and which were likely symptoms. S and I went over this list and decided what to focus on first.

I made a chart for each child with the days of the week down the side and their waking hours (divided into two hour blocks) across the top. At the bottom of the page I put an explanation of the required behavior, as well as the consequences (both positive and negative). As the two hours blocks pass I either mark them with a brief reminder of the circumstances of poor behavior or the children mark them with a sticker if the time has passed with only good behavior. 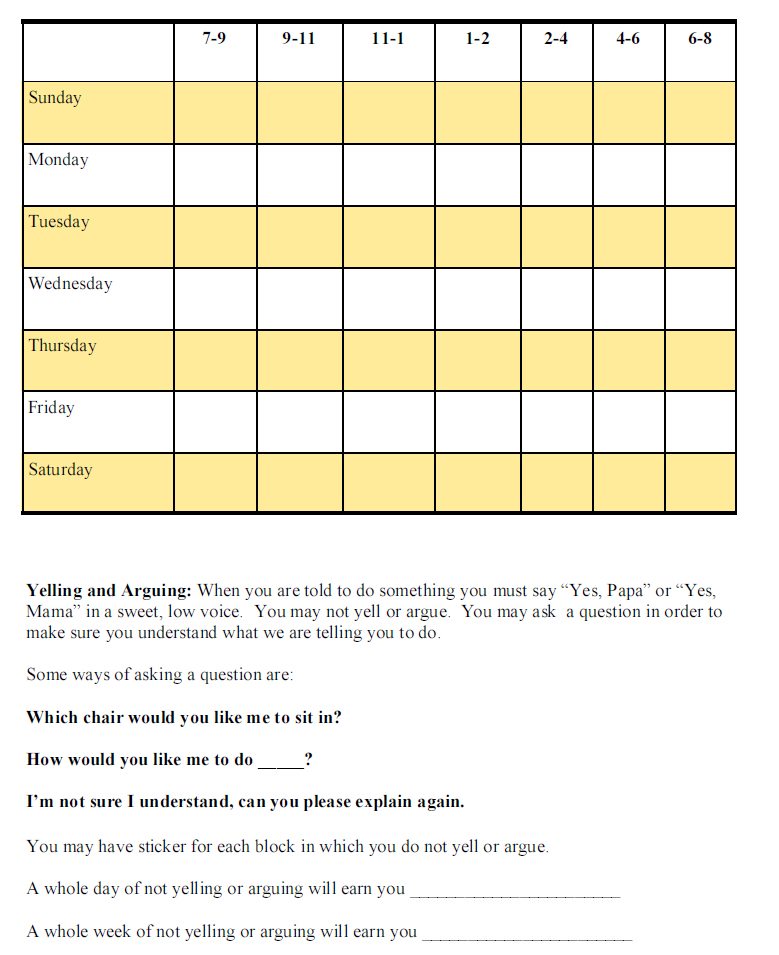 This is F’s current chart. Yelling is a continual problem for him and one we come back to over and over…

I color code the charts so I can tell at a glance whose is whose and we all are greatly encouraged when someone gets a whole row of stickers!

I’m still not as consistent as I could be but the charts really help as they make it possible for me to objectively measure changes and because I write a little note in the space when there is a problem S and I can review them together to see if there is a common thread that needs particular attention.

As an example last year Su really struggled with working quickly when she was given a job to do. By behavioral charting we were able to see that she consistently dawdled when she had to put the silverware out of the dishwasher away. We focused on that task for a while (a couple of months at least) until she could do it well in a reasonable time-frame. We encouraged her to work quickly when we gave her other jobs but mostly didn’t give consequences for dawdling except for the silverware. By focusing on the one job we were able to teach her how to work better (she still struggles with it but is much improved most days)without having to make every job we gave her an area of correction.

It takes some discipline on our part to keep up with charting but each time we use this method we find that we are more consistent and that our training is more peaceful.

Here are some blank behavioral charts to download and try: Generic-Behavioral-Chart.pdf (446 downloads)