Posted on February 18, 2017 by Kyndra Steinmann 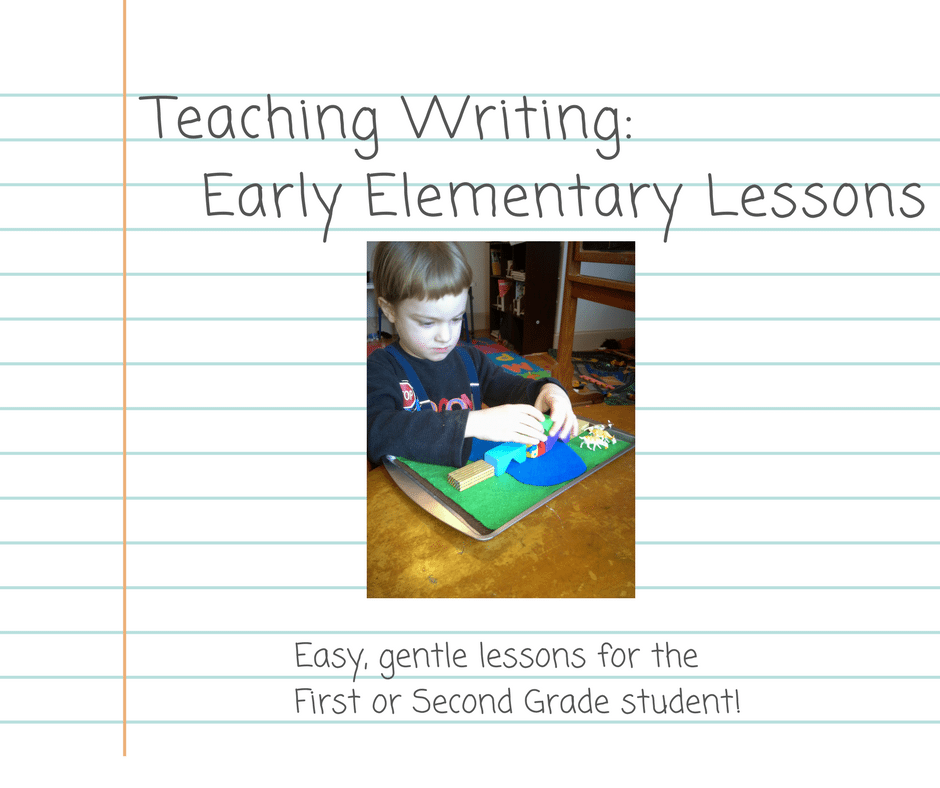 The two subjects that seem to strike the most fear in the hearts of homeschool parents are math and writing! There is tremendous pressure to have students perform well in these two subjects and parents often feel that they, themselves are inadequate mathematicians and writers. How are they supposed to teach what they don’t actually know?

There are numerous approaches to both subjects but I would like to look particularly at the teaching of writing skills in the next several weeks (and will perhaps look at math skills at a later date).

Every time a student puts pencil to paper or fingers to keyboard they are preparing to communicate something. It may be simple math facts or a complex argument about world economies but the purpose of written language is to enable different people to read, comprehend, and internalize (learn) information. Even imaginative fiction communicates information as authors seek to explore the human spirit and discover whether the setting or shared human nature determines the actions of the characters. This communicative nature of the written word means that we should first look at how children verbally communicate before asking them to add the skills of writing, spelling, and composition to the process.

Long before a child puts pencil to paper they are already assembling the tools needed to be a successful writer! When the excited toddler runs up crying ” Baby, fall!” she is telling a story and communicating a narrative although she needs to add to her vocabulary and understanding of grammar. When parents respond to this “story” with their own communication, “What happened? Did you bump your head?” they are helping her begin to understand how to assemble a narrative.

Similarly when preschool aged children begin the (often wearying) series of “why” questions, the way that parents answer can help them begin to understand how to logically explain something. Not only do parents need to ask “Why do you think …..?” but they also need to ask questions of their child in order to encourage them to move logically from the facts they know to the facts they can infer.

Throughout the early years children not only need to be exposed to good verbal communication in many forms- read aloud books, stories told aloud, conversation, and answered questions they also need to be encouraged to make their own narratives with such questions as “Tell me about your day.” “What game are you playing?” and so on.

Parents should also note that they are modeling communication when they speak with their children directly and when the children are listening to adult conversation and many of the strengths and weaknesses they observe will be imitated.

Once the children have started learning to read and write the question of getting them to write down their answers and learn how to construct paragraphs and coherent narratives naturally arises in the parent’s mind. Writing is clearly a good partner to reading and the child is given many opportunities to record his or her answers to questions, or to record experiences in written form. Often times tears and frustration on the parts of all parties are the result and the parent is led to conclude “my child can’t write”.

You are correct. ?Your child probably can’t write. They can tell you a narrative of some kind but they have not yet become comfortable with all that goes into writing down their narrative and they are not ?ready to be set before a blank piece of paper and bidden “Write.”

As with all other subjects the place to begin is with what the child already knows and can do. Formalizing and strengthening existing skills will lead naturally to their growth in new areas. Formal narration is the first step to strong writing.

In the beginning I like to include some action with the narration. I find that providing the child with pieces to help the story along and “jog” his memory leads naturally to drawing parts of the story and then writing them down. As you can see I write all along and gradually hand off more and more of the writing to the child. 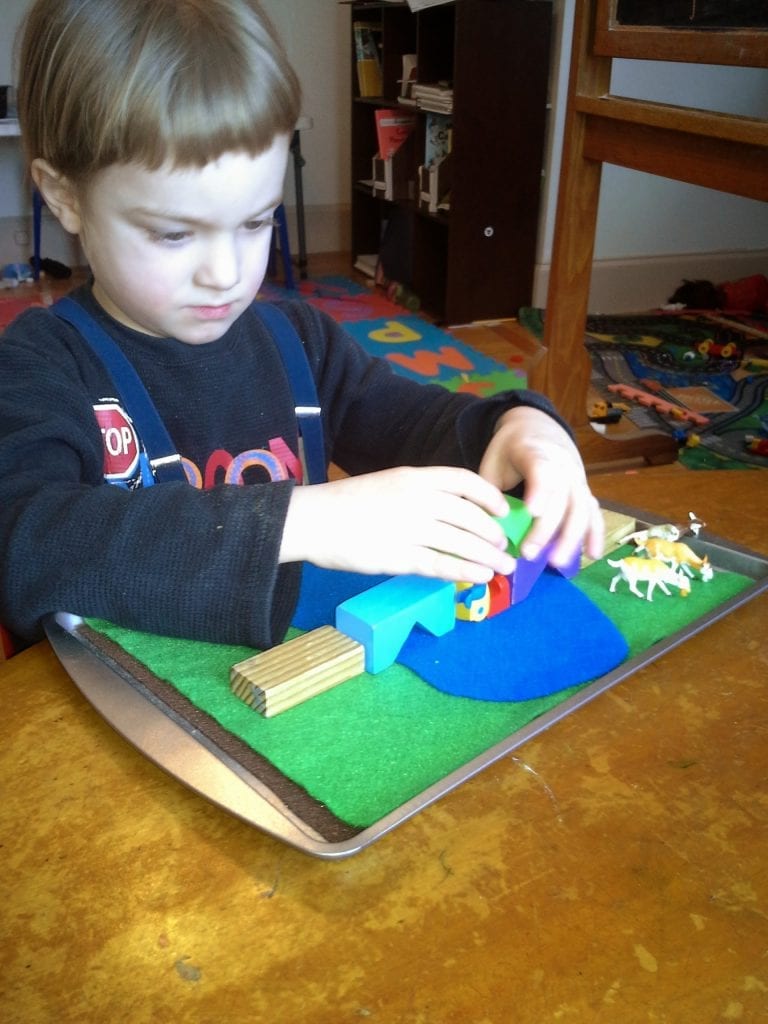 I like to begin with a familiar story. The Three Billy Goats Gruff is ideal since it contains both a clear flow from beginning to end, and is repetitive enough to allow the child to practice getting all the details into a story without having to learn multiple sets of details.

I give the child (this is Bull at five years old) a tray with some props for the story- green felt for grass, blue felt for the stream, a block bridge, Lego figure for the troll, and three goats from our collection of animals.

I then tell the story, marching the goats across the bridge and bringing the troll up at the appropriate times.

Afterwards I restore all the figures to original position and ask the student to tell the story. Sometimes he needs some prompting, but other times the action of marching the figures to and fro helps to remind him of the important actions and flow of the narrative.

Then we put the tray away.

The next day, I ask him to tell me the story again, but this time I write down the first part of the story. We repeat the story telling with my writing until the whole story has been written down for him to read. ?I like to do this in a “story writing” journal that has space for the student to draw pictures.

We may repeat this step with several stories, until he is comfortable with telling a story with several parts, or if this has gone smoothly we may move on.

Writing Things Down On Their Own

Once the narrate back to Mom, Mom writes things down, and the student reads it back and illustrates it has become a smooth process, we are ready to introduce the idea of doing the writing himself.

Now when he listens to me tell a story or read something simple aloud I will ask him to write down one thing that he thinks is important or remembers. I don’t worry if he comes up with something that isn’t actually that important (learning to listen well is a related but different skill), I just want him to give me something that he heard and remembers, even if it is only one word.

At this point I either don’t worry too much about spelling, or simply spell the words for him. I’ll start asking for sentences instead of words and model the kinds of answers that are complete sentences by repeating and elaborating on what he has said:

“Who was Daniel Boone?”

“What else did he do? Why do we remember him?”

“He explored the wilderness.”

“So put those things into a sentence. Daniel Boone….”

“Daniel Boone was a trapper who explored the wilderness.”

“Now let’s write that in your notebook, do you need me to spell anything?”

By the end of the early elementary years, the student has usually gotten impatient with waiting for me to spell things and will take the pencil and attempt the work himself. This is satisfactory for an early elementary grade student and we will build on it in the next few years until he is comfortably composing and writing several paragraphs at a time.

A Note on Corrections and Grading

In the early years, I only give a grade or keep a record of completion of assignments. I don’t take points for bad spelling, or grammar mistakes (capitalization, punctuation etc.). I will erase and have students correct the mistakes.

I do make students do work over if it is deliberately messily done. I also don’t accept papers that have doodles on them as I feel like part of the point of the assignment is to learn to do work that is pleasing to the eye as well as expressing the thought.