Posted on February 2, 2011 by Kyndra Steinmann

Several weeks ago I read a post on Making Light about sprouting seeds for adding to salads etc. This reminded me how much I like sprouts and I thought I would do a little experimentation on my own.

Accordingly I rinsed out some jars, adding mung beans to one, salad greens to another, and peas to a third. I duly soaked and rinsed and after a few days had sprouts. Unfortunately we’ve had a problem with mice lately (oh the joys of renting an old house (1890’s)) and the mice thought that fresh green stuff was a good idea too!

They chewed their way into the jars through the screen on top of the jars and I didn’t really want to eat the sprouts after that.

Instead I filled four planters with potting soil, and gently placed the sprouted pea seeds in them. I placed them on the ledge at the bottom of the foundation for the front porch. Hopefully the combination of southern sun and residual warmth in the foundation at night will get me some early peas… 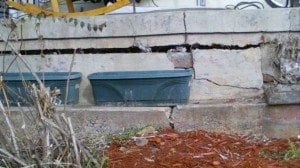 Planters for peas by the front porch.

This time of year I’m desperate for anything that even faintly resembles green plants and gardening. I dream of summer days in the garden and fresh fruits and vegetables. Maybe next week I’ll plant some spinach…

1 Response to Gardening:Desperate for Spring