After picking F up from his preschool program yesterday I realized that I should restock on milk so we wouldn’t have to get milk again until Wednesday or Thursday next week. We had nearly a full gallon in the fridge, so if I bought four gallons and kept the milk consumption to one glass each at lunch and dinner, we might make it until Thursday! W is the most enthusiastic milk drinker of the crew, and I’m expecting that either we will need a separate fridge for him by the time he’s thirteen or his own cow!

Anyway we went up the street from F’s school to the grocery and I did the usual routing of loading children into/onto the shopping cart. W in the seat (because he needs a belt), Su in the back and F on the back where he can jump off and fetch things as needed. As I did this I said to the children, “You know this is probably the last time we’ll go shopping with only three children for a while.”

F of course started trying to engineer a solution that would make it possible to keep everyone in their usual places while adding #4! This is so typical of him- don’t change the usual arrangement of life just add something in on the side! He finally concluded that the best thing to do was for him to carry the baby in it’s carseat. Not actually possible I’m afraid since these modern infant carseats are both heavy and awkward and he’s still a couple of inches shy of my shoulder, but not a bad solution.

Here’s a brief glimpse at some other things we’ve been up to: 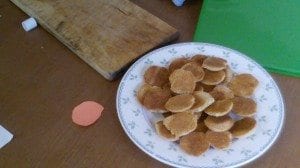 Homemade Vanilla Wafers - they didn't last long at all! 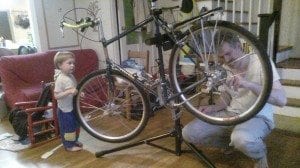 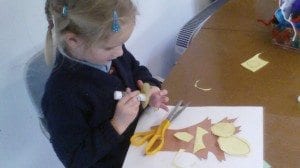 Su loves to do art projects. 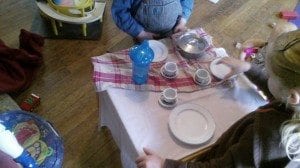 And of course waiting for Number 4….

The waiting is nearly over. In fact the next time you hear from me will probably be baby pictures. I did the Pre-admission testing at the hospital this morning, and Monday is the day! So exciting!

This entry was posted in Preschooler projects, Uncategorized and tagged conversations with F, Creating, F, preschoolers, Su, thanks, W. Bookmark the permalink.

1 Response to Here We Go