Those of you who know me in real life, know that housekeeping is just not my forte. As I explained to someone recently “I was born a teacher, and any place that life resembles teaching I rock! Any place it doesn’t I have to work to do half of what comes naturally to others.” 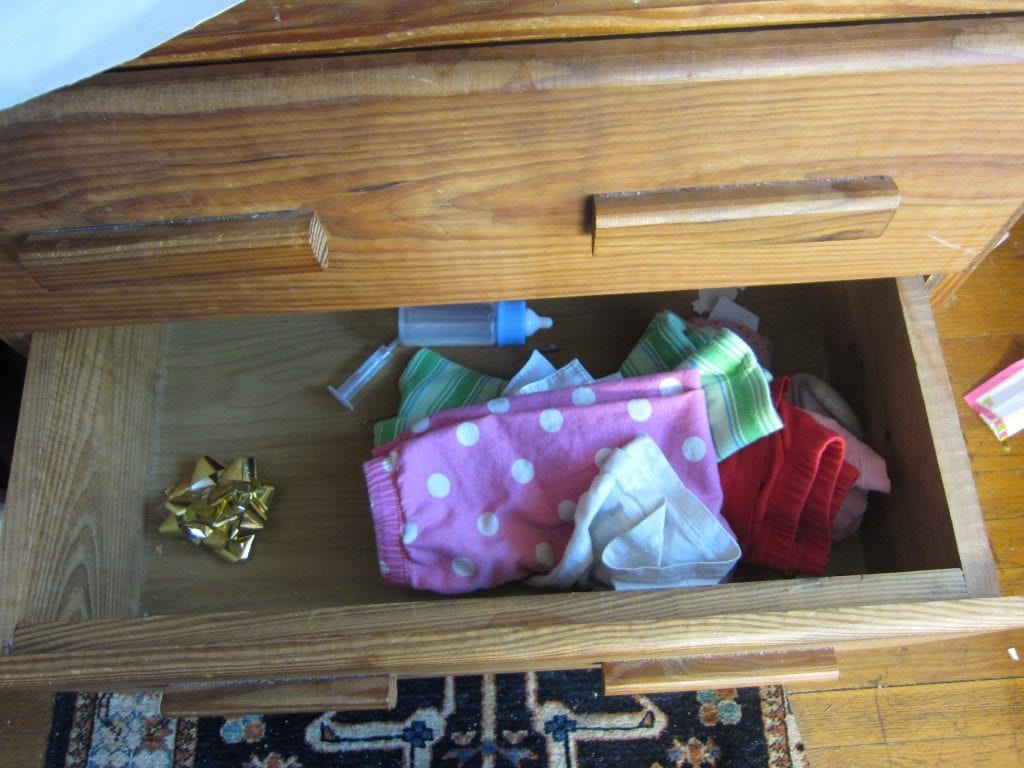 Fewer clothes = less laundry to do!

Part of what this means is that anytime I have an excuse to not do housework I’ll take it! Someone wants a cuddle? Someone commented on a post? Feeling a little under the weather? I’m easily distracted from the house and the necessary work it takes to keep it from chaos!

For years I’ve thought “oh, if I just had the right system, I’d lick this housework thing.” and that’s true to a point; but no system can do the work itself. It isn’t the children getting older either, although they are a great help, it really in the end comes down to what I want to house to feel like and what environment makes me pleased and peaceful.

Here’s the odd thing: I don’t actually like clutter. It confuses and stresses me and interferes with my ability to create. I didn’t realize this until recently, but realizing it and acting upon has had a huge positive benefit.

Now I’m going to toot my own horn a bit, because I really am pleased and also kind of amazed!

I’ve spent the past month, concentrating on tidying up, straightening things as I walk past, and keeping up with the laundry. Last week I had a horrid head cold and no energy, but I still did those things,but no real cleaning (and you could tell by looking at my kitchen Monday morning!) and instead of the chaos that would have a taken another week to fix after I was well, the house needed some straightening, and I had the regular laundry to run but nothing extra!

I could still see the floor in all the bedrooms, the flat surfaces hadn’t acquired great piles of stuff and everyone had clean underwear in their drawers! Can I just say “YAY ME!”

I got to thinking about what made the biggest difference in the past week and I think there were three things:

1. My husband noticed and said something several times about the house being picked up

2. I’ve almost got a habit of straightening as I walk by, so things just don’t degenerate as quickly

3. My experiment with reducing the number of clothes the children have really has resulted in a much more manageable laundry load.

That last one still seems wrong somehow to me- fewer clothes should mean I’m washing more, but the truth is that although I’m still pretty much doing a load a day, that was never the hard part for me. The hard part was getting the laundry folded and put away and since the children now have drawer space to put their own clothes away and a simple three drawer system (top- underwear and sleeping clothes, middle- warm weather, bottom- cold weather) even Bull can put his own things away. Also they aren’t changing their clothes as often, and then throwing things that are still wearable into the laundry! I didn’t realize that was happening but suddenly I’m only getting the right number of clothes for the days of the week instead of twice that number!

Linking up to Raising Arrows today!

This entry was posted in Celebration, Housekeeping, Life, Uncategorized and tagged laundry. Bookmark the permalink.