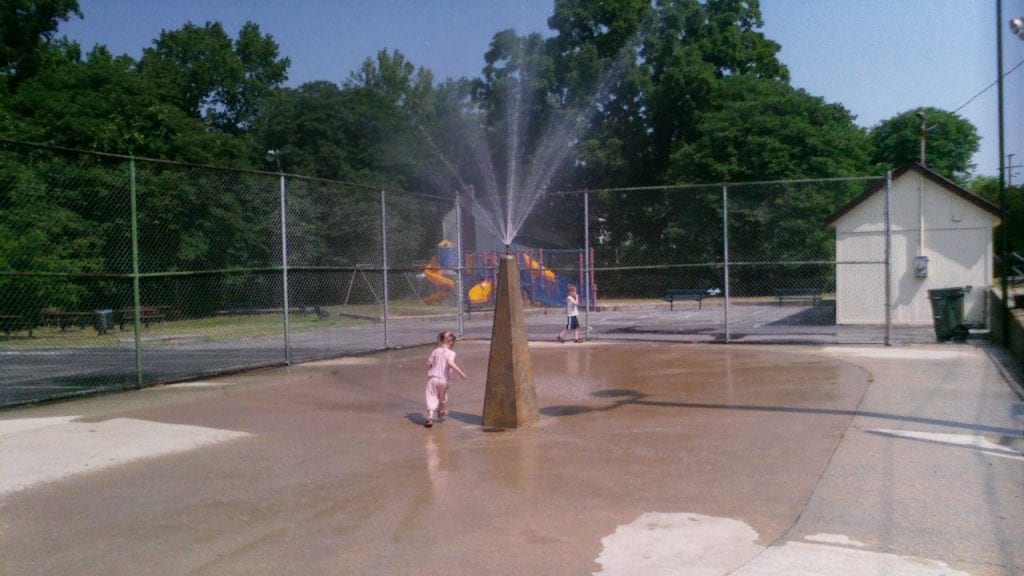 This is from last summer! The children have grown quite a bit…K

I said Part 1 because I am quite certain that yesterday was not the last time she will end up in the ER!

On the way home from church yesterday we stopped to chat with a neighbor. They were just heading down to the playground at the end of the neighborhood to turn on the fountain and play for a while. We really enjoyed the fountain last year and there was some time before lunch, so we hurried home to change and went down to join them.

Jack and S stayed home to make lunch, so I put Bull in the jogging stroller and away we went.

The fountain was lovely and we started a game of prisoner’s base (modified heavily). I was capturing the children and having them stand with their hands on the fountain until someone else came and free them. Good fun!

I captured Mouse and Buggle freed her! I captured Buggle and quickly grabbed Mouse too, but as I was taking her to the fountain she started to cry.

We moved out of the water and I looked. Yes, the crease between her big toe and the ball of her foot was bleeding and I could feel a piece of glass in it. Fun was over. The jogging stroller became an ambulance and we hurried home to S, who is the designated puller of objects in the skin!

He tried to pull the glass out but it was clearly in very deep and her foot needed to be numbed before digging around to find the glass. I put her in the car and off we went. First to urgent care but they sent us on to the Pediatric ER at the local hospital.

I cannot say enough good things about that ER. They had clearly thought about what would make their patients the most comfortable and reduce the scariness of the experience. They did a competent and sympathetic job of assessing the situation and pulling a chunk of glass about the size of one of Jack’s front teeth out of her foot!

Here’s the part I found most interesting though (especially in regards to Mouse’s stated desire to be a doctor); as soon as we were in what was clearly a medical environment she calmed down, and her curiosity came to the fore. She wanted to see her x-rays, she wanted to know exactly what the doctor and nurses were doing and why. She asked the purpose of everything she could see.

And she listened to what was going on in the next room and thought about what treatment the doctor would probably use on a little boy who had fallen and hit the edge of a table.

Today she has a bandaid and a sock on that foot but seems fine. Hopefully that will be our only ER visit this summer.

This entry was posted in Life, Thanks, Uncategorized and tagged Life, Medical Adventures, Mouse, Raising a Doctor, teaching moments. Bookmark the permalink.