Posted on February 1, 2011 by Kyndra Steinmann

F and Su take turns being my “kitchen helper” in the evenings. They set the table, fetch and carry and F is now beginning to make some simple dishes.

The other day we had Mexican Chicken with Garlic Bread and he did most of the preparation of the Garlic Bread.

Here’s what he did:

1. Washed his hands then assembled his supplies,

First I had him peel about ten cloves of garlic. He loosened the skins by partially crushing the cloves in the garlic crusher. 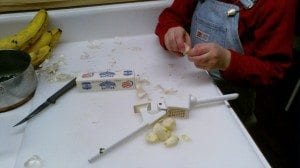 Then I helped him put the stick of butter in the pan, put the pan on the stove and melt the butter over low heat.

He crushed the garlic into the melted butter. I had to do some of the larger cloves. We let the butter and garlic sit for ten minutes or so, while he laid the bread out on a baking sheet. I poured the butter over the bread and stuck it under the broiler for about 5 minutes to toast.

He carefully took the tongs and put the bread in a basket and put it on the table.

Obviously I needed to do some parts but in a year or two he’ll probably be able to fly solo.