Our school year is much, much busier than in previous years. Everyone except Daisy is taking at least one dance class, Buggle and Mouse have choir, and we all go to co-op on Wednesdays. I’m teaching two Science classes and everyone is taking Science, Music and Gym.

In addition the academic workload has increased as the children grow and as I try to incorporate their interests into school as well as covering the basics.

Since we’re still trying to also go the Homeschool Bible Study/Playgroup we started attending last year, we only have three mornings for school. Afternoons are cut short three days a week so we can go to dance and/or choir.

The first thing to suffer tends to be the regular chores and some weeks we’ve ended up having to play “household catch up” on Saturday, which is not my favorite way to use a weekend.

The past few weeks I’ve been concentrating hard on getting the basic housework done every day.

There’s a lot to do and it seems overwhelming, for all of us when we look at what has to be done and try to just work through. Instead I’m learning to break up the job times and the jobs into smaller “bites”.

One of Mouse’s jobs is to load the dishwasher and clear and wipe the counters. That’s a job that can take me 20 minutes and to her it looks impossible. She doesn’t know where to begin and the bad attitude and dawdling that result from her feeling of having to do a huge job make the job go badly. 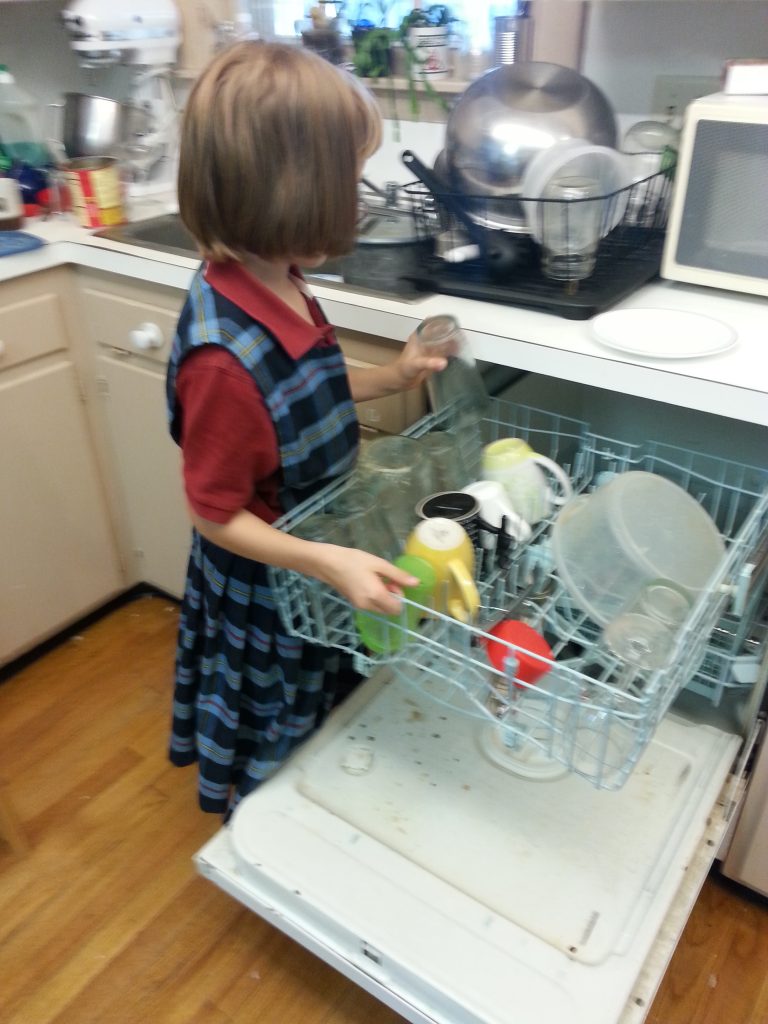 If I go into the kitchen before her and start the job by filling the sink with soapy water and some dishes, putting a few things in the dishwasher and clearing one small section of counter

“Here, Mouse, I’ve started your dishwasher job, see how quickly you can finish it!”?

She feels partnered with. The job doesn’t seem as big because part of it is done already and she is able to work much more cheerfully and quickly.

Similarly when Buggle goes to fold laundry, if I fold some while keeping an eye on Bull’s job of setting the table. Buggle feels like he has help and is able to complete his task cheerfully.

We have three short chore times each day, with only a few jobs per child. They know that they can be done in less than an hour if they hurry and are motivated to work quickly.

I also find it much easier to manage the jobs if I can set aside those times for job management and not try to do other things at the same time.

My hope is that they are learning how to break large tasks into smaller more manageable ones which is a skill that they will be able to use lifelong.