One of my goals as a parent is to help the children learn to regulate and control their own behavior. As they grow older and become more mature, I want them to grasp the concept that their behavior may have longer term consequences than my immediate response and I want them to begin to think about good and bad consequences of their actions before they act!

In teaching these concepts I found that we commonly ran into two difficulties: I forgot to be consistent in application of consequences or forgot to impose them, and they lost track of how their day had been going, felt like they were failing all the time and became discouraged.

We needed some kind of easy to use and easy to see method of keeping track of our day and behaviors and consequences that shape it.

When we moved to this house I added a large (the biggest one I could by off the shelf) whiteboard to the kitchen to use for grocery lists etc.

After some thought I added a space for “smiles” and “frowns” to the edge of it for each child. I color code a lot of things around here so it was easy to simply write the parts of our day in each of the big three’s colors with a space for drawing faces. 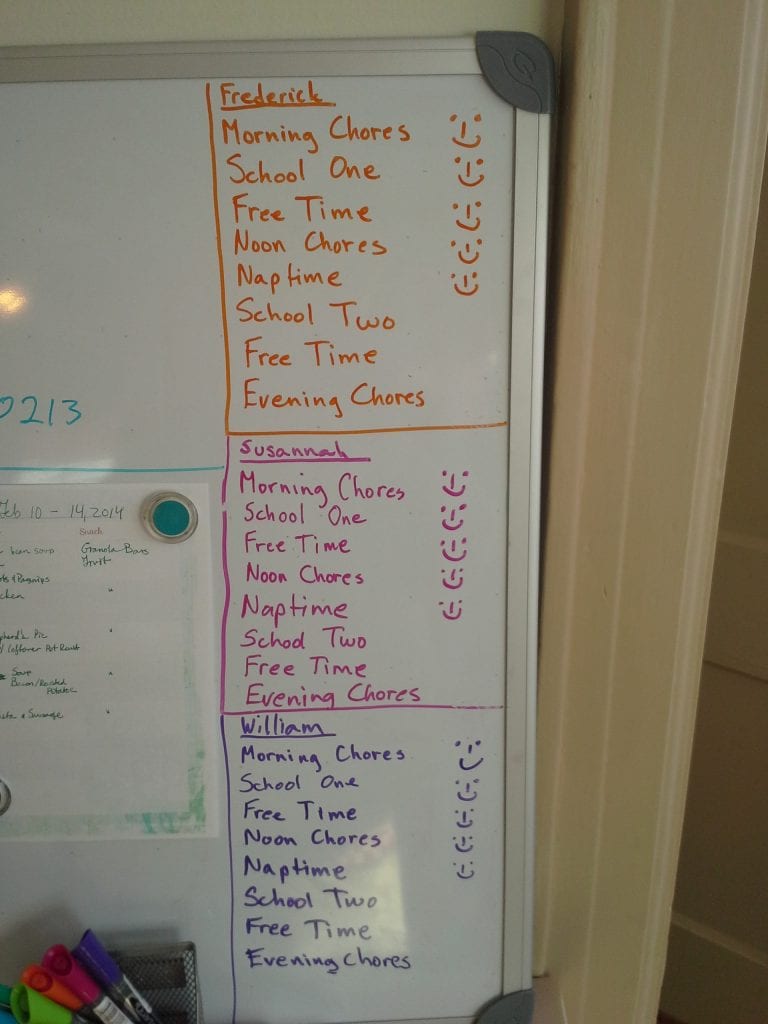 ? As we go through the day I mark off the day parts with smiles if they have done well and frowns if they are needed. Any child who succeeds in having a smiley face for every day part is allowed to stay up an extra fifteen minutes after their regular bedtime. “Staying up late” is a much sought after privilege and they check the board frequently throughout the day and ask me to update it as necessary.

Some weeks we concentrate on a particular behavior that needs to change while other days they receive a smile just for contributing to the peace of the household by being cheerful, willing and kind. This enables me to work on particular issues with particular children, and to encourage in them in their general outlook as well.

I did have some concerns about whether or not frowny faces in the early part of the day would discourage them from trying for the rest of the day but this has not been a problem. We talk about how a day can start to go badly but be redeemed to the point where it will still be a good day if not a perfect one.

The visual aid of the smiles and frowns has been especially good for Bull (4). I do give him warnings (“You have all smiley faces, but continuing to ___ will get you a frown.) which is often enough to help him control himself to stop whining or pestering his siblings. I try hard not to give more than one warning in order to keep the marking system effective.

Often with the older two I focus on something that has become a habit (this week it will be huffing and sighing for Buggle and looking for something to complain about for Mouse) as charting habits helps them to see just how often they do something and to learn to replace a bad habit with a good one.

I try to review with them each week the kinds of things that will earn smiles and frowns and be as clear as possible in my descriptions. That clarity means that they generally accept a frown without argument and can readily tell us why they aren’t staying up on a certain night.

Having the day divided into parts means that they have much shorter term and more concrete goals to strive for and means that they can differentiate between what they need to do doing morning chores and what they need to do during free time. This encourages them to self-regulate their desire to yell and run around by giving them a time to do so and a set time when doing so wouldn’t be appropriate.

We have run into a few instances of “I have all smiles and so-and-so has TWO frowns” but so far have been able to deal with that by pointing out that it is not kind to gloat or brag and having the offender apologize.