Posted on February 15, 2013 by Kyndra Steinmann

One of the first teaching jobs I had was as a reading tutor. I worked with several little boys who all had speech difficulties that had hindered their ability to read. All of them were receiving speech therapy and my job was to take the improvement in speech and help them translate that into the phonics they had learned to improve their reading skills. I was 16 and really had no experience beyond listening to my mother teach my siblings (some of whom had struggled) to read. I read with the boys and corrected their pronunciations, practiced reading words that they had trouble with, played games, and read to them and listened to them talk about their day, sometimes writing a short narrative for them as they spoke and sometimes having them write.

I noticed that as their ability to tell a story improved so too did their interest in reading and their desire to communicate beyond expressing their needs. They developed a need to express themselves in words and nuance.

Years later when I taught math for a residential program for troubled adolescent boys I saw that the boys who did the poorest academically (and therefore were the most likely to misbehave) were also the ones who had the least ability to tell a coherent narrative. Not only did they often not have the vocabulary they needed, they frequently couldn’t tell a story from beginning to end without having to loop back several times to correct the order of events. Poor narrative skills caused the obvious trouble in classes requiring reading and writing, but they also struggled with math because they could not keep track of the order in which things needed to be done.

All of this has been in the back of my mind as I teach my own children. With Buggle and Mouse there hasn’t been much need to encourage storytelling. They love information and are happy to explain things to whoever will listen. They occasionally need some prompting of the “What happened next?” or “What did you start with?” variety but they have a good sense of the order of things and from a young age have been able to tell S about their day and ask questions about his that make it clear that they understand that one action or event follows from a previous one and may even be caused by it.

Bull has struggled with expressing himself so that we can understand him and that struggle has taken enough of his mental energy that his storytelling skills are not as developed as I would like. I first noticed the difficulty in the fall when the children would bring in objects for our nature table and he could tell me what he had found but not where or why.

His clarity and enunciation have improved a lot in the past couple of months and I’m now working with him to build his ability to tell a story. Recently we had the story of Noah in his preschool work. I spread the story over several days and we made a set of pictures to help him retell the story to S at night. 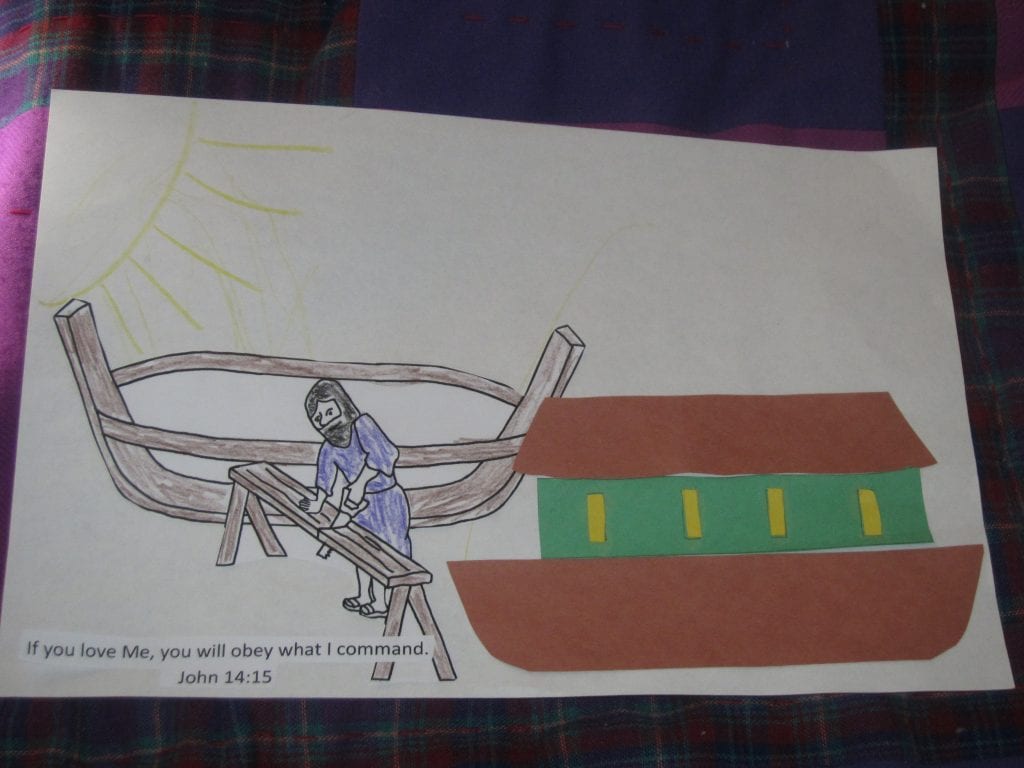 Day 1: For most of these kinds of storytelling pictures I like to use a mix of coloring and gluing. As we assemble the picture (fine motor skills, hand-eye coordination) we discuss the story (narrative). 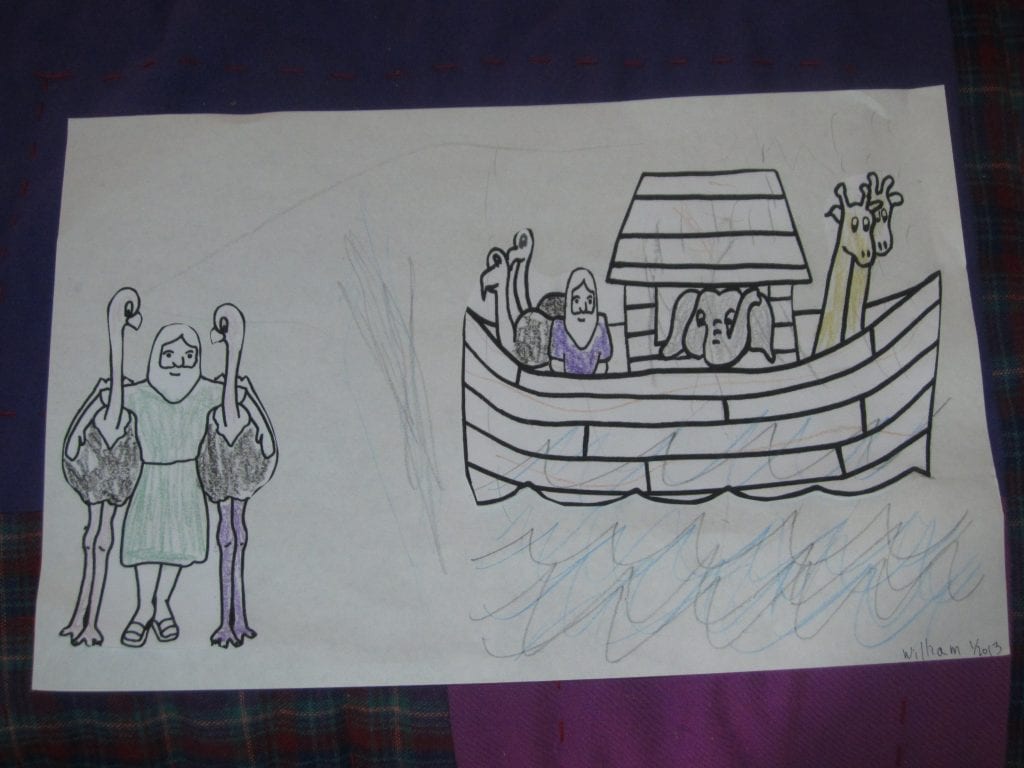 Day 2: Again we used a combination of gluing and coloring. I do the cutting as Bull is just starting to use scissors. 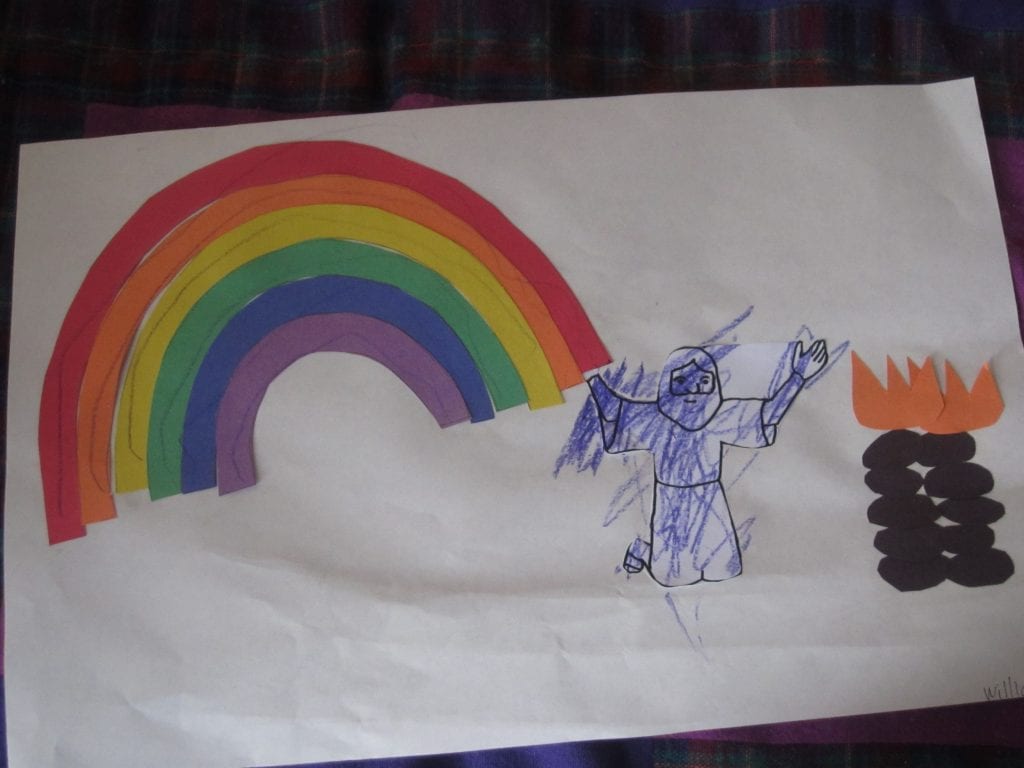 Day 3: Making the rainbow out of strips of colored paper was an excellent exercise in ordering things as well as hand-eye coordination.

Each night he told S the whole story from the beginning and added a few more details as well as solidifying the ones he already remembered. 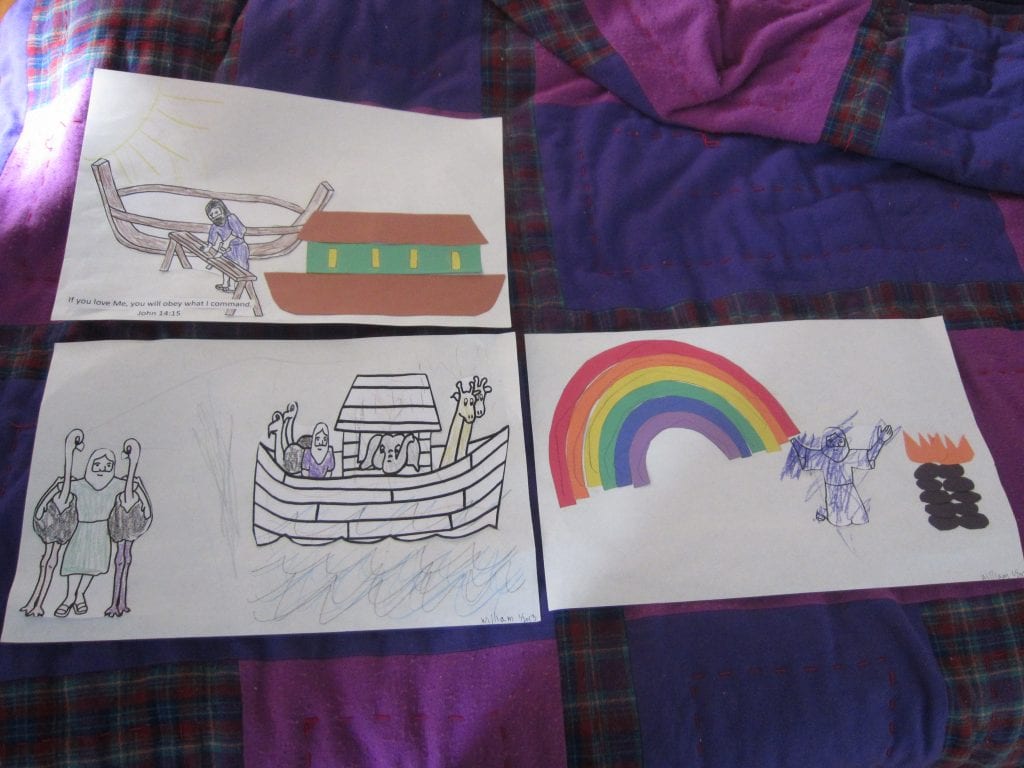