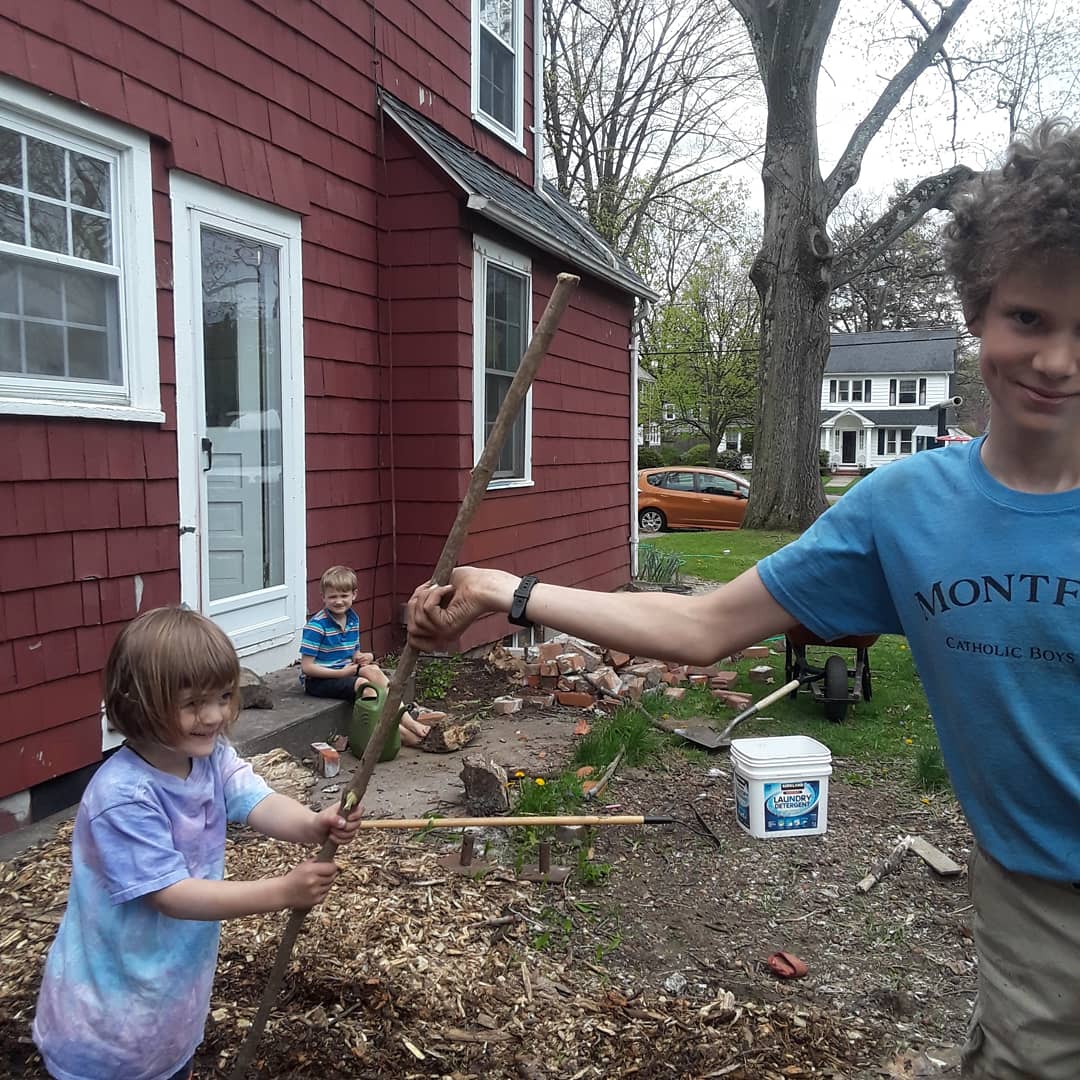 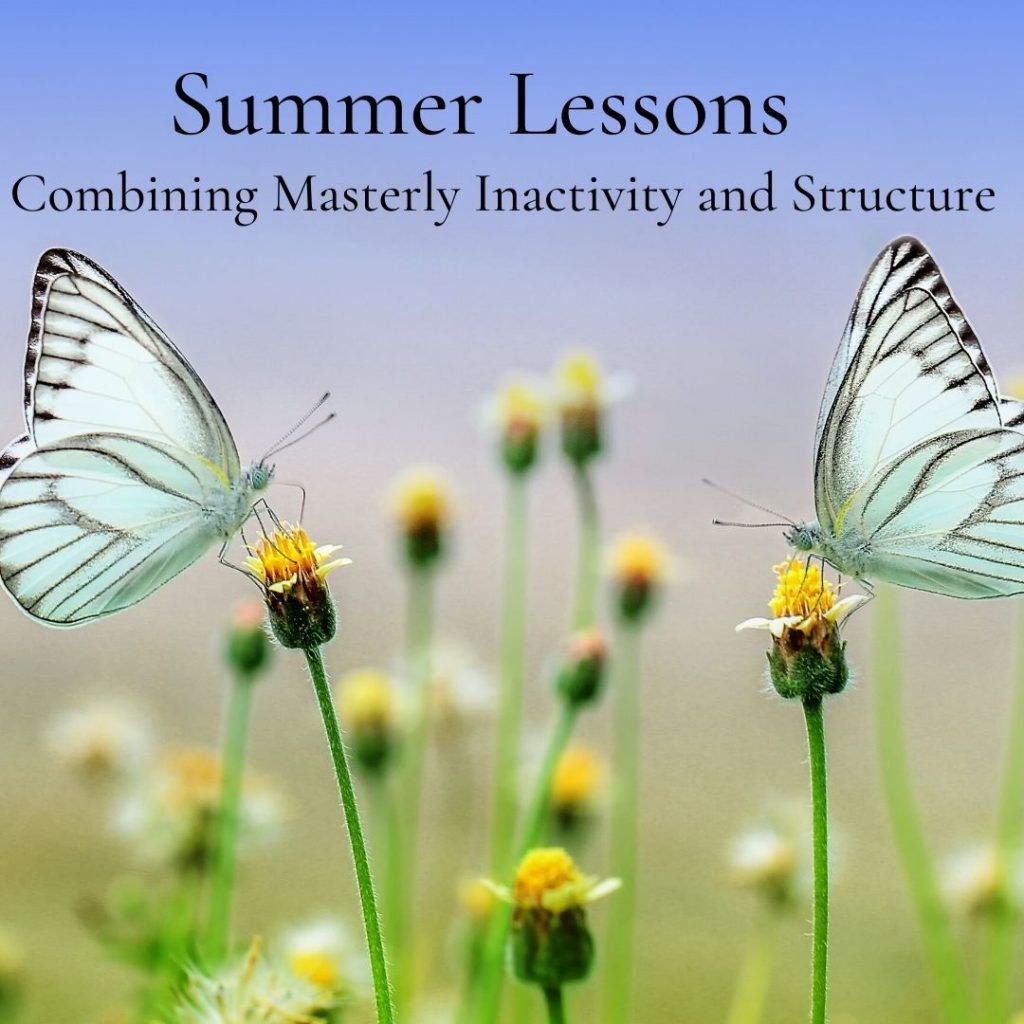 How we love your long, lazy days and lack of agenda and how we grieve over the quarrels and claims of “I’m booooored”.

It is certainly true that idleness breeds mischief eventually and  while a holiday can refresh, we do truly need to work.

When we lived in the South in made sense to school through the year in 6 or 8 week chunks. The children were younger then, and lessons didn’t take much time, and schooling year round meant that when the city baked in July we could be indoors in the cool doing lessons and free to enjoy the lovely weather of early spring and fall.

Up here when the weather is so often nasty for weeks in the winter and is pleasant almost the whole summer long it has seemed more reasonable to take the summer off and school during the less pleasant months.

There were definitely some drawbacks to this approach; the most notable being that the children seemed to think that a break from lessons eventually meant a break from any effort or labour at all and by midway through the summer the resistance to helping in the household and the cries of “I’m booooored” swelled in equal measure. I was able to offset those cries and encourage people to work by arranging various pleasant expeditions to swimming holes and parks and by taking several summer trips, but these also had their drawbacks from my perspective as they greatly hindered my goals of accomplishing projects during the summer.

This year, the virus added an additional impetus to returning to our former plan of year round lessons broken into reasonable chunks and since the children are older, we have adopted the English method of three 12 week terms with a month or so off between them. This provides us with three holidays: Summer in August, Advent in December (something we have done for many years), and Easter in April (or thereabouts depending on the date of Easter).

This week we began again with a different  set of lessons from last Term:

There is a set of prayers that I would like the older three to be familiar with. They are called “Arrow Prayers” and are short , one sentence prayers for particular situations. I think there are around 50 of them in the St. Gregory Prayer Book that we use at home, so I am writing two of them on the board in cursive each day and the children copy them into their notebooks. They are written in liturgical English so they also serve to enhance the children’s vocabulary and sense of style as well as teaching them that prayer need not be long and involved but can be quickly uttered whenever there is a need for grace.

The younger two have plenty of writing in their phonics books and also may choose to trace their dictated Nature Study narrations so I’m concentrating on good writing habits and not assigning additional copywork.

Here we simply continue on with MEP. Currently, we are using Year 1, Year 3, Year 5a, Year 5b and Year 9. It’s quite a stretch for me to be teaching beginning addition and subtraction, beginning multiplication and division, advanced multiplication and division, fractions and decimals (the two ends of Year 5), and Algebra. It’s neat too because I can see the scope of the whole curriculum and how what is learned in one year naturally grows into a new technique in the years following.

We also do mental arithmetic during Morning Time and Daisy astonished us yesterday by adding up this problem: 9+3+2+4+2+9+2+8 to get 39! She made a couple of mistakes but was able to correct them herself when told they were wrong.

The younger two also have a number of Montessori math works and do those several times a week.

We read the Psalm for Morning Prayer together and the older three are reading Acts and writing short narrations for each chapter. Little kids and I read from their Story Bible as we have been throughout the year.

Since the weather is nice and we have a big park nearby, I’m making an effort to really engage with Nature Study each day. The younger two are using Exploring Nature With Children and I have the guided nature journal to use as a reference, while the older three are doing something similar using Exploring Nature Throughout the Year. I really like these two guides for Nature Study as they are simple, yet allow for expansion and have ideas for expansion as well as art and poetry weekly.

Additionally we are growing a good garden this year so some days Nature Study looks like this: 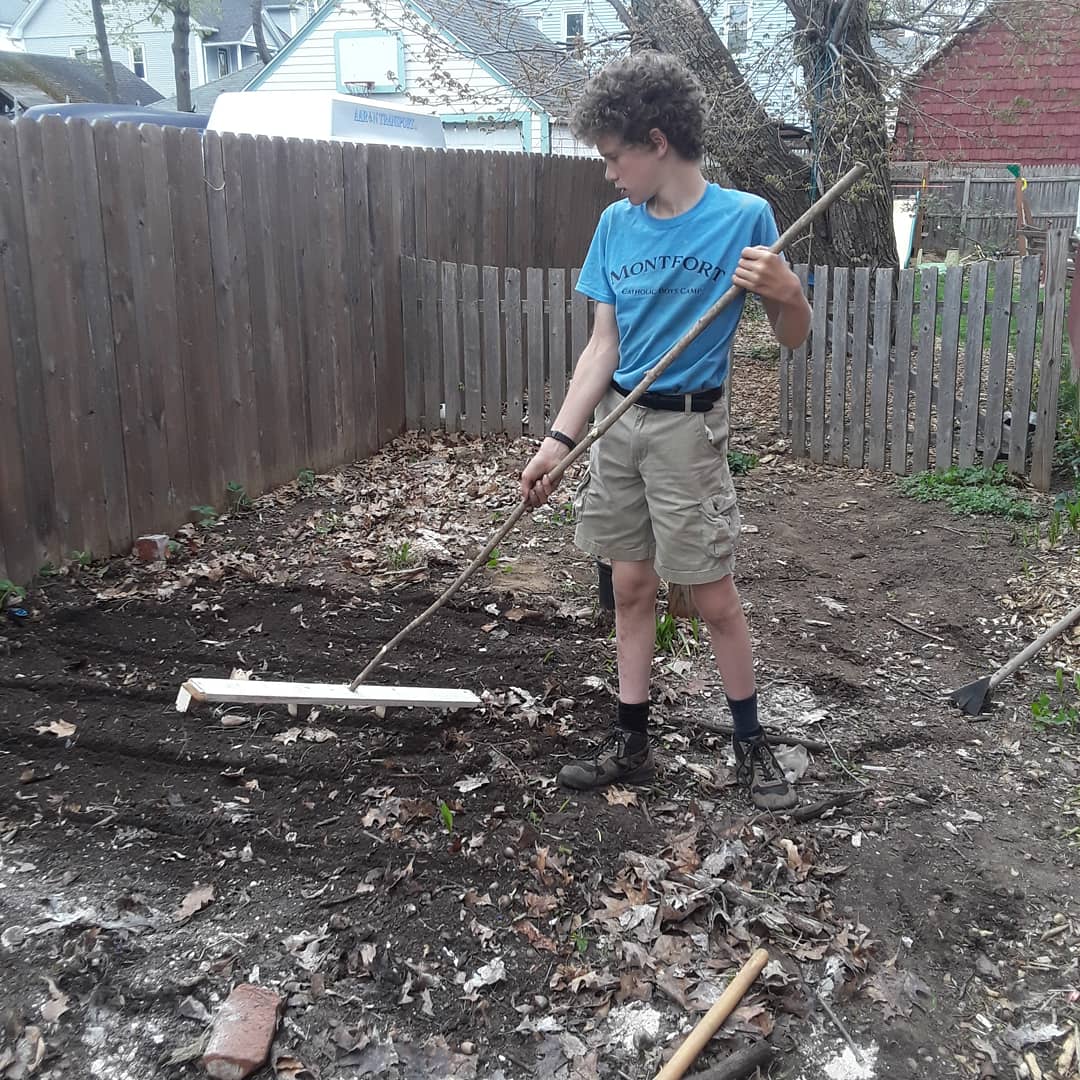 We also have a few studies going in various areas where I think extra practice is needed or someone has an interest. Typing and Science for the older three, Composer Study for everyone, singing our way through the Easter section of the hymnal, and keeping up with Latin and French Vocabulary to name a few. Not everything is done every day and we aim to be done by lunch time, and then have the afternoon for individual pursuits that are (mostly) independent of me (masterly inactivity).

It’s an interesting balance to try to maintain: enough intellectual stimulation that the imagination is also stimulated and the mind has fodder with which to develop ideas (this is, by the way, the concept behind summer reading lists), enough physical activity (and some of it strenuous and requiring effort to continue to build habits of the will, opportunities for wonder and beauty and selflessness that will strengthen and grow the soul. I find that I, myself, also need this structure. To find a balance for mother that fills my soul and centers me so that I can nibble away at my various tasks and projects. I try hard to be available and interruptible and yet to pleasantly hold a boundary of ” Mom, is working and you can solve this problem yourself.”

If the goal is to raise children whose feet are set in a large room, then I think it is also important to help them to learn to navigate not only their physical spaces but also the life of their own mind and soul. Masterly inactivity combined with a structure to the day gives them the freedom to explore and try and the boundary within which to do so. Already, I can see that the children have a better idea of what they want to do with their time since there is a constraint on how much time they have. Purposeful use of their time leaves them feeling that they have accomplished something and the satisfaction of accomplishment leads to joy and contentment. 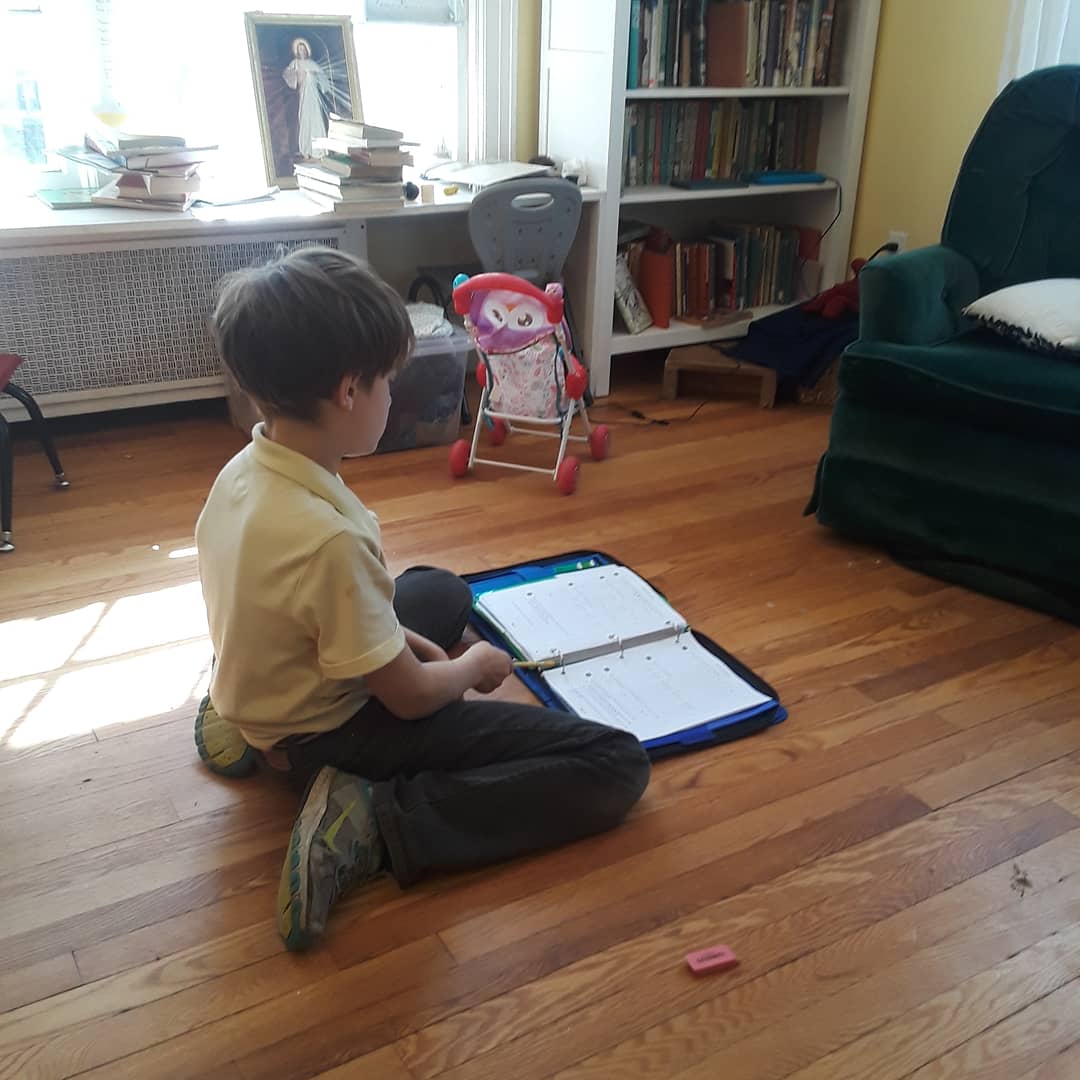 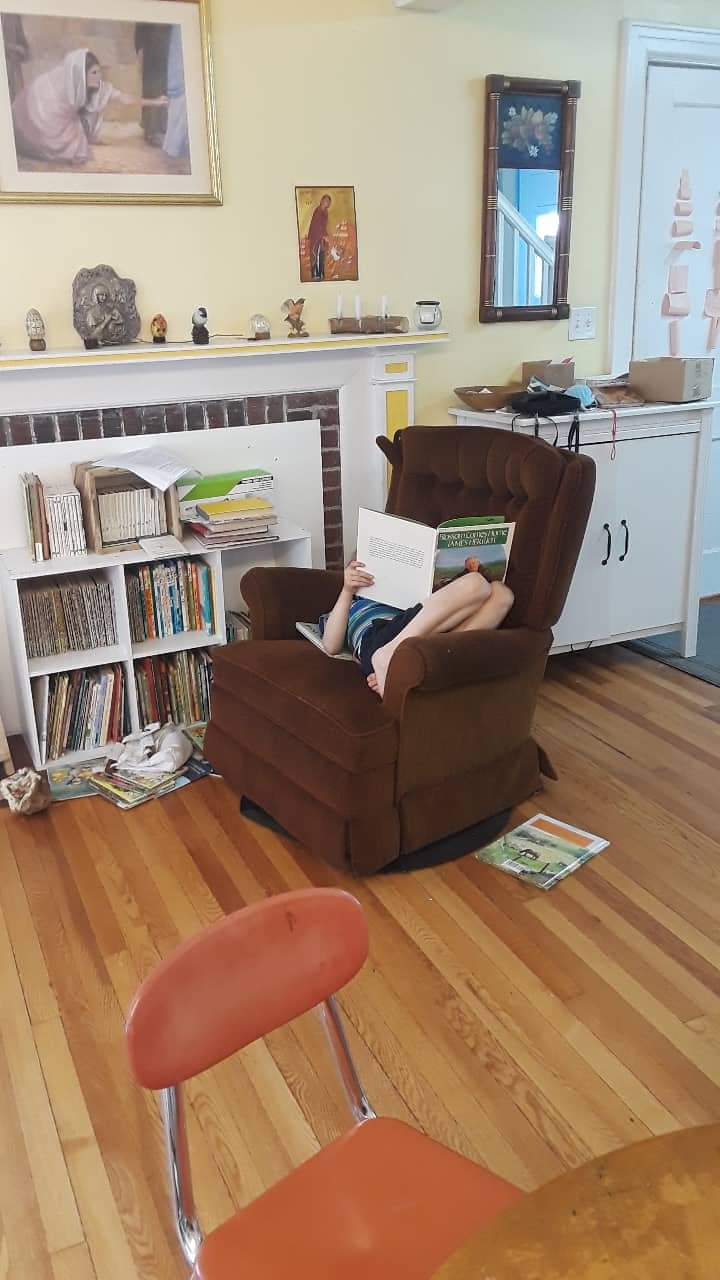