The Busy Toddler and the Sensory Bin

Lately we’ve been doing school around the dining room table instead of in the schoolroom. We begin around the table with our Morning Time stuff – decade of the Rosary, copywork while I read from one of the books we’re studying for Catechism, Memory Work and Recitation, Maps for History, and whatever hymn we’re learning. 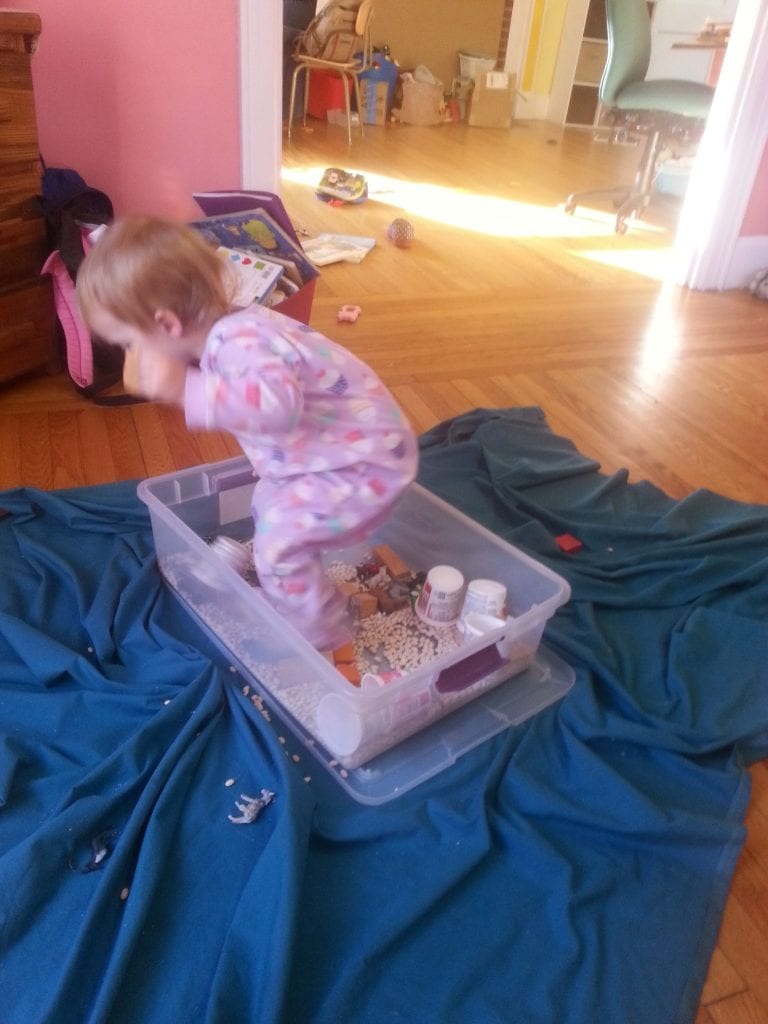 This resulted in the bin being put away!

Often by the time we’ve gotten through that first forty minutes the busy toddler has settled herself to some occupation and as I’m not comfortable with her being downstairs by herself it seems easier to just send the children to get their books from upstairs and keep working where we are.

One of the occupations that Daisy really enjoys right now is her “sensory bin”. It’s nothing fancy. A large, plastic bin that I put some kind of material in that’s fun to scoop and pour. I include a bunch of empty cups from yogurt, some spoons, and a handful of small toys.

Better use of the sensory bin.

A few weeks ago I had a couple of boxes of cornflakes that had been opened but never eaten before the weather turned cold. Into the bin they went to be scooped, tasted, crushed and stirred. I included a selection of small earth moving trucks and Daisy and Jack were quite happy to spend a good bit of time moving “rocks” around the bin.

Of course, sensory bins can really make a mess!

I have a few tricks for keeping things reasonably under control:

With these guidelines in place I can generally count on the bin keeping her busy for twenty minutes or so, which is just enough time for me to teach someone bigger a lesson.