Posted on January 9, 2018 by Kyndra Steinmann

Lately Daisy (AKA The Busy Toddler) has been fascinated by counting. She can say her numbers in order up to ten, but only has a concept of the amounts represented by the numbers up to about six.? Anything above that simply gets assigned a large sounding number (the current favorite is eleven thirty-two for some reason). She can count the fingers on one hand, but then begins again at one in order to count the other hand.

Pretty typical for this age, but I thought I’d add some pre-math learning into her day, in order to capitalize on her interest. 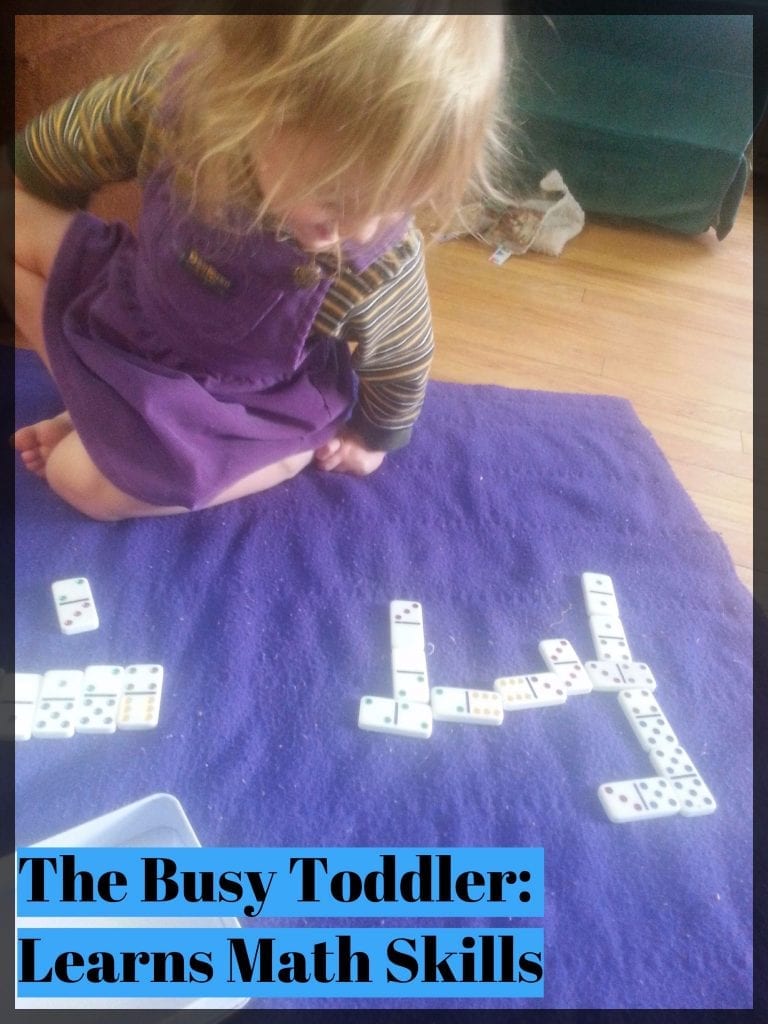 Here are her current works:

Domino matching: This is a great tactile and math exercise at this age. Our dominoes are porcelain so they are heavy and smooth, and make a satisfying click against each other.? They are color coded as well as patterned for the various numbers. At this point Daisy matches the colors to make her pattern, but her natural curiosity about counting will lead her to count the dots and she will begin to learn the number patterns as well.

This activity requires a good bid of concentration. She first has to set up her work space, then work with the dominoes, and then clean things up.

She does this work on her purple blanket which stays folded in a cabinet when not in use. In order to work, she first takes it out, and spreads it flat which takes some time as she is particular about it being flat and does not usually want any assistance.

She then takes the dominoes out of their drawer, opens the tin and dumps them on the mat to arrange and rearrange as long as she finds the work satisfying. Sometimes she will call me to see what she has done, but at other times she goes through the whole process from taking the blanket out; to putting the dominoes away and stuffing the blanket back in its cabinet (she can’t quite fold it yet) without any interaction with someone else. I try to leave her to work and to keep the other children from breaking her focus.

Skills learned: Following a process, matching of colors and eventually patterns, hand-eye coordination in placing the dominoes, attention to detail 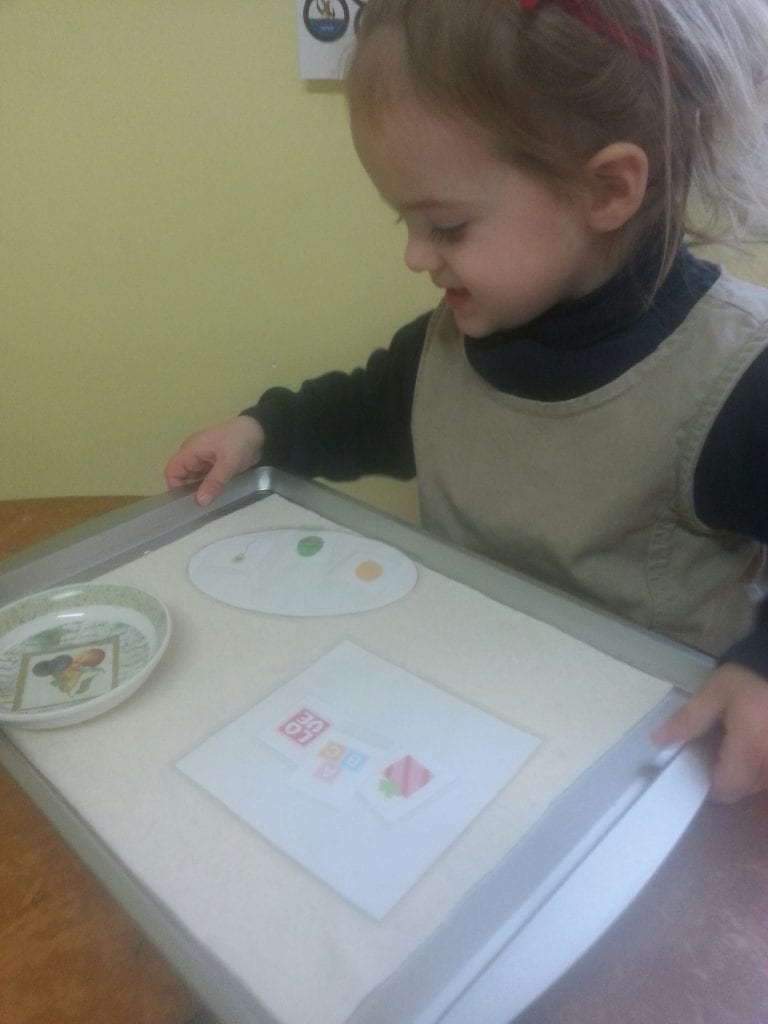 Shape sorting: Working with representations of shaped objects (pictures of boxes, blocks, and balls for example) as well as with actual three dimensional shapes helps children to develop spatial relationship skills. Daisy loves to do puzzles and her shape ball and is now working with a tray of shape sorting pictures. Here she divides a pile of smaller images by sorting them according to the basic shape they show.

I made this tray with a printable file and am slowly introducing the concept by giving her just two shapes to sort by. Eventually I will give her the whole set of ten shapes and all the sorting pieces, but that would be overwhelming at this point.

These were a Christmas gift. I had seen them at a friend’s house a year or so ago, and found them on sale on Amazon. She loves them and when she has conquered them I have more advanced ones (currently on Jack’s shelves) for her to continue to learn with. I will probably also do some extension work with them by having her trace the shapes and so on as her writing abilities develop.

You can find them on Amazon: 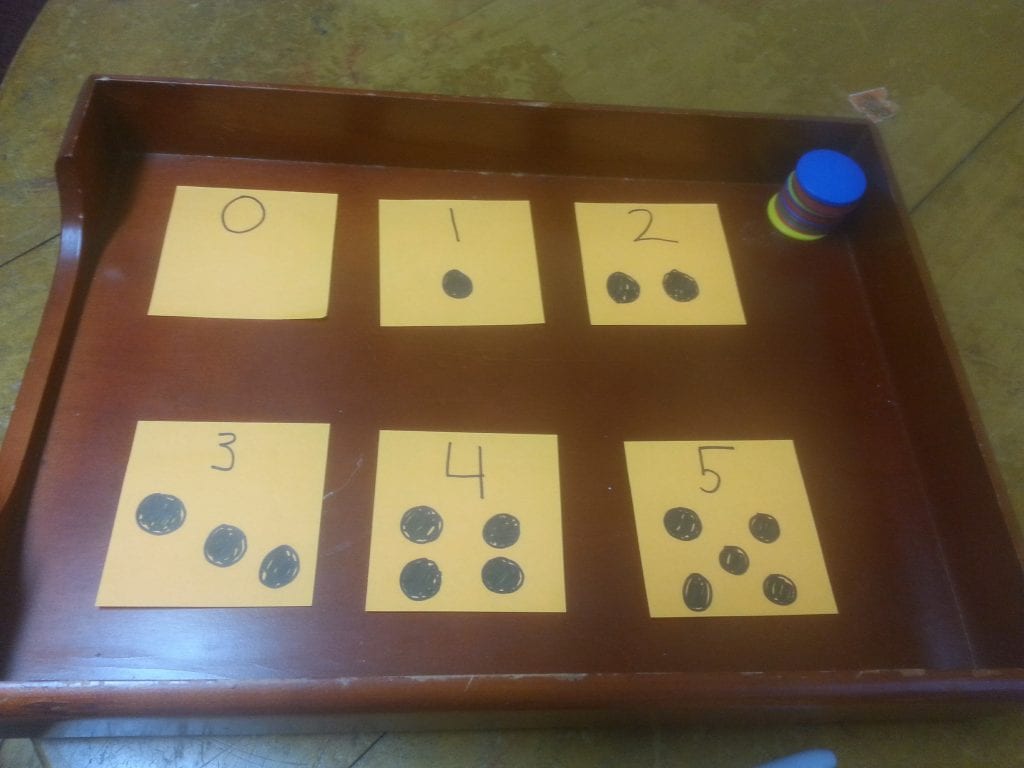 One-to-one Correspondence:?This tray is designed to help Daisy learn to associate the name of a number, a numeral, and an actual amount of something. I took me about five minutes to set up (Sharpie marker and post-its on a tray!) and she uses the counting chips to cover the dots while counting them aloud. I thought this one would be short lived but she comes back to is over and over, so it (or some version of it) will stay in the rotation for a while.

We will stick with these activities for a while, until it becomes clear that she is ready to move on to more complex concepts such as counting about five! I expect too that she will glean a good bit from Jack’s tray work as she loves to watch him work!