The Weekly Plan (and Link-up): July 8

Last week was busy and had several late nights due to fireworks on Wednesday and a cookout on Thursday at my brother’s place an hour away. Children even slept in a little a couple of mornings and we skipped school on Friday since everyone (especially me!) was tired out.

Our first few days of the new school year went well and I’m not that worried about the day that needs to be made up as our planned schoolwork for the next month is about to be thrown into complete confusion!

Today we begin 5 weeks of at least one child having some kind of a day camp to be dropped off and picked up from. I’m excited as I think the children will really enjoy the classes and benefit from them but I am not looking forward to all the driving and I really need to sit down and re-jigger school plans!

Mouse gets two (one week/ half-day) art classes one on drawing and one on textiles (she is beyond excited about that one).

Bull is going to a four week/ half-day preschool program at our beloved JCC where he will learn to swim and hopefully learn to enjoy socializing even if everyone can’t understand him! He has had some individual classes over there and I’ve been so impressed by how the teachers work with him to stay with the group and interact when his tendency is to zone out and/or wander off to do his own thing since his peers find his speech so incomprehensible. We are working on getting him into speech therapy (that’s a little mini-series of posts right there!) and he is trying to speak more clearly but it’s hard on him (and he’s naturally the most sociable of my children).

So’s here’s what got crossed off last week: 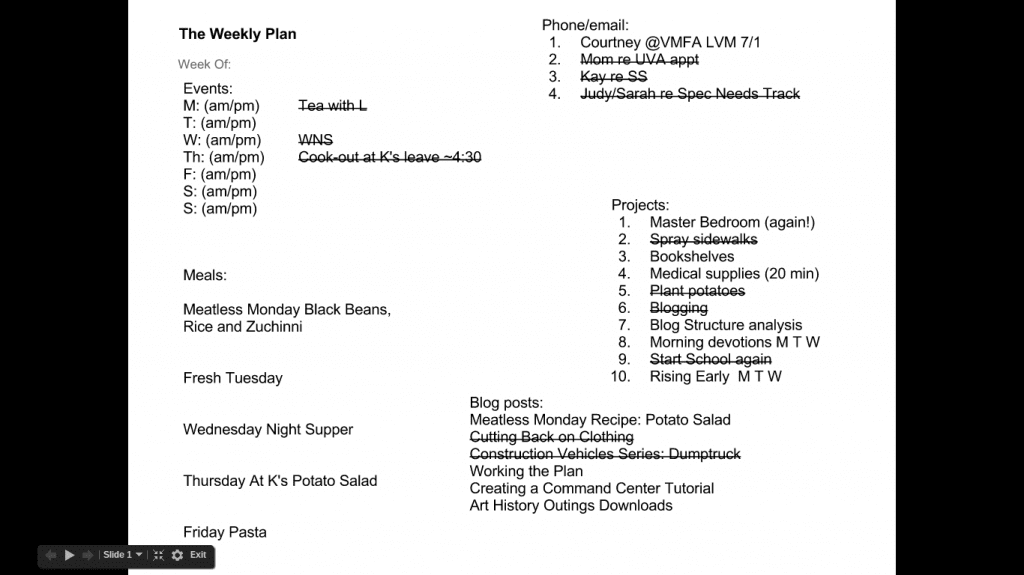 Not too bad although I seem to only be able to make it to Wednesday with getting up early and having devotions! S and I are going to try hard to get to bed by 9:30 this week so hopefully that will help (and hopefully I’ll get a decent nap today as I was up for over an hour last night with an asthma attack! SO NOT COOL!)

The really big thing this week is the first Art History Outing to the VMFA! I’m so excited about leading this opportunity but a bit nervous too as the response has been very high and it looks like there will be rather more than the half dozen or so people I had thought would be interested. Oh, yeah, I haven’t been able to get the docent from the museum who works with homeschoolers to call me back either!!!

Got a small ton of blog work to do this week too but that’s why I’m rearranging the napping (advantage of being up with an asthma attack- my brain works overtime in the quiet and dark). I realized I could move Jack’s afternoon nap from our room where my desktop computer resides into his room, and then next week when Bull starts at the JCC and is worn out in the afternoons I could put BOTH little boys in the same room to nap and let Buggle have the playroom for his napping/ quiet time space. Hopefully by the time Bull has been falling right to sleep at naptime with Jack in the room for four weeks he’ll have developed a habit and the little boys can continue to nap in the same room!

So here’s the plan: 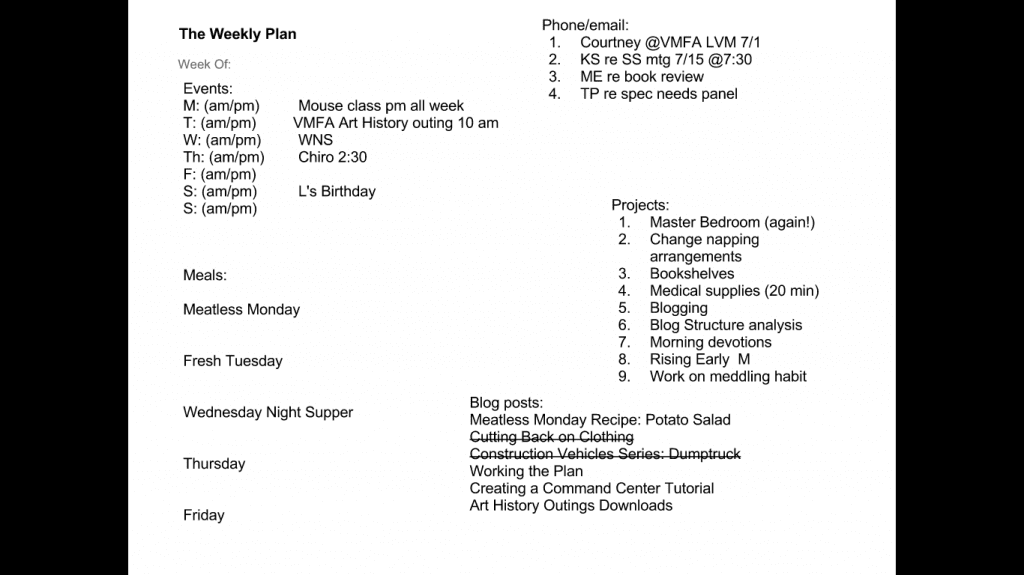 This entry was posted in homeschooling, Housekeeping, Life, Schedule and tagged Working The Plan. Bookmark the permalink.