What Are We Learning? Form 2A and 2B

Posted on September 26, 2018 by Kyndra Steinmann 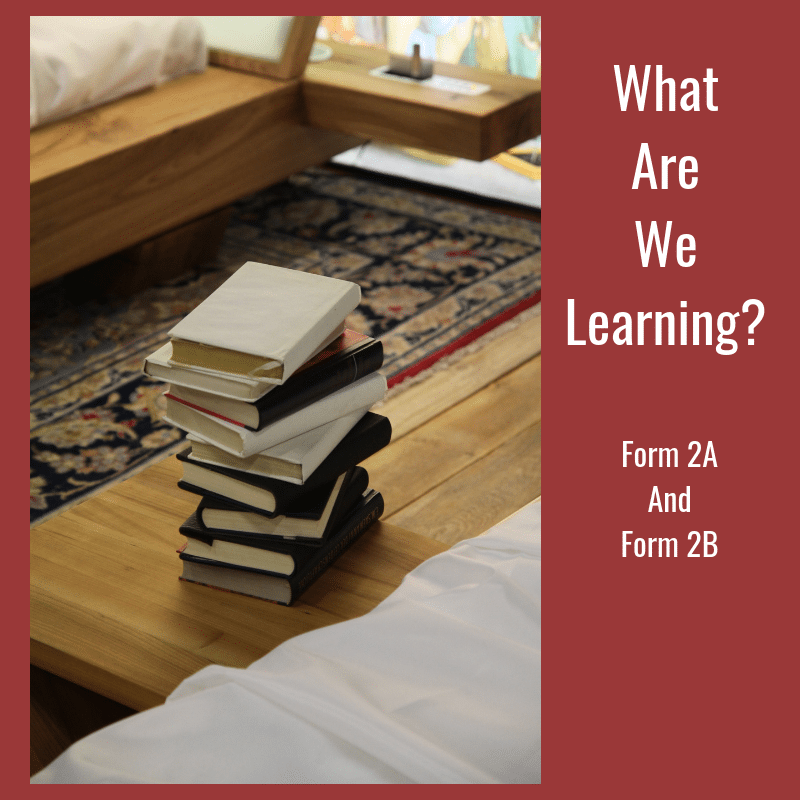 When Mouse and Buggle were younger, I schooled them as if they were twins for the most part. Last year it became clear that they needed to move away from each other in pursuits and expectations both in academics and in life in general!  Boys and girls just mature differently and when you throw in their particular learning quirks and differences in interests they really need a year or two to do things on their own!

Since I don’t really want to teach five separate versions of everything every day- I’ve combined Mouse and Bull in some subjects and Bull and Buggle in others so that each has about an hour of work that they are the only student for and the rest is done with someone else (sometimes with the older child teaching the younger as they learn together).

Bull is 8.5 this year, and is moving into more and more independent learning with me just providing a framework and help as needed. He is capable of incredible focus and diligence but is somewhat lacking in confidence, so we are working on being willing to try something before wailing about it.  He still has some trouble with speech and articulation but Memory work and recitation is helping with that quite a bit.

I organized the children’s books on individual shelves this year, with the older children being able to read anything on the younger children’s shelves as “free reads” and no one reading above their own shelf.

Bull’s shelves have a mix of history, natural history, and free reads:

Famous Men of Rome- Both from Greenleaf Press

The Secret Life of the Forest- Richard M. Ketchum

The Aeneid for Boys and Girls- Alfred Church

The Adventures of Odysseus and The Tale of Troy

The Golden Fleece- both by Padraic Collum

Herodotus and the Road to History- Jeanne Bendick

Baltimore Catechism No 1- He is doing about 1 chapter every 2 weeks, so there is plenty of time to memorize as well as read and answer the study questions.

and in order to help him understand the Mass more fully:

Math is MEP Book 3 which I expect him to finish around Christmas time, and then move into Book 4 .

Latin is the last third or so of Song School Latin 2. He should finish that around Christmas as well and will begin Latin for Children Book A.

Music is covered by a piano lesson at co-op and singing during Morning Time. That is a very hard subject for him, since his ear is not terribly developed, but he enjoys singing and is gradually becoming more tuneful!

Memory is done for 15 minutes every day. This year I have given him a collection of poems like Jabberwocky which appeal to his sense of humor and fun and are fairly short as he does better with a quick payoff for the effort.

At this point in his school career, he does most of his lessons on his own, with the exception of math where he needs some encouragement in confidence and occasionally an actual explanation of a concept. Latin also requires a fair bit of input from me as he hasn’t quite gotten his mind around the how of learning a language and gets frustrated quickly. I spend about 30 minutes with him on those two subjects and then another 15-20 during the history block to listen to his narrations and give dictations.

Finally, he is taking Geology at co-op (I’m teaching using Ellen McHenry’s Rocks and Dirt which I highly recommend). He’s also taking a geography class based on the Holling C. Holling book, Seabird.

Mouse is my Form 2B student but as this post is already quite long, I think I’ll have to publish a Part B!