Any mother knows that one of the most frustrating things is keeping the children’s rooms cleaned up. We don’t want to do it ourselves, but enforcing clean room standards can be a daily battle and who wants a daily battle?

Around here the boys (F and W) share a room and Su has her own room, which J will share eventually (he’s still sleeping next to our bed as I’m too lazy to get out of bed to feed him on the nights when he wakes up at 2 am).

F’s Legos live upstairs and he has a workbench up there to use for building, drawing or whatever during his daily room-time. Generally speaking the boys do a good job of keeping their room at least “walk-throughable” (I’m sure that’s not a word, but I need one that means I can walk across the floor without stepping on something!) Still at the end of a week there is usually enough mess that I can’t vacuum, without having them clean up first.

Su on the other hand is my daughter! I’ve struggled all my life to keep a tidy room (still do) and she’s the same way. She loves to do three creative things at once, while also playing with her babies and by the end of a single session of room-time (1.5 -2 hours) not only can I not walk across her room, I can’t always open the door!

The thing is that she has a much better time playing/working in her room when it is tidy, but really struggles to tidy it herself. I don’t want to clean it for her and I also don’t want to fuss and stand over her while she does it. I’d been puzzling over the problem for some time when I went to the homeschool convention and during one of the workshops I attended I had an idea!

The presenter was talking about using matrices to help give an objective measurement of a child’s skills and it suddenly occurred to me that I could do something similar for the children’s rooms. It took a little while to come up with a list for each of them but here’s what we have: 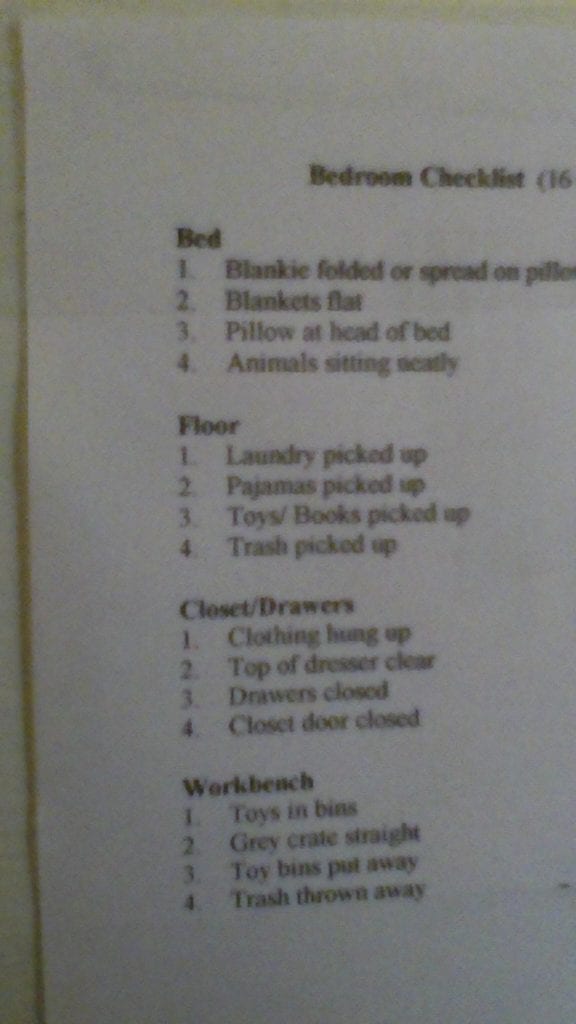 This is the checklist for the boys’ room.

As you can see there are just 16 items and they are all as concrete as I can make them. Currently F does everything except W’s bed but as W gets older he’ll do more. F really loves the checklist as he knows exactly what he has to do in order to get his 16 points (worth 16 minutes of extra staying up at night). Since he can read I give very little direction beyond “Go clean your room for 16 points.” Some days he gets it done in ten minutes some days it takes longer. Some days he gets the points and some days he misses a few but it is very concrete and measurable and he thrives with that.

Su also has a checklist on her door. It’s a little different since her room and furnishings are different. She doesn’t read as well yet, but the concreteness of what makes up a clean room also works well for her and she is learning to just work her way down the list as F or I read it to her. It seems like one of the problems has been not knowing where to start when her room is a mess. In the six weeks we’ve been doing this she’s only gotten the full 16 points once but she does usually get at least 13 which is far better than it used to be. 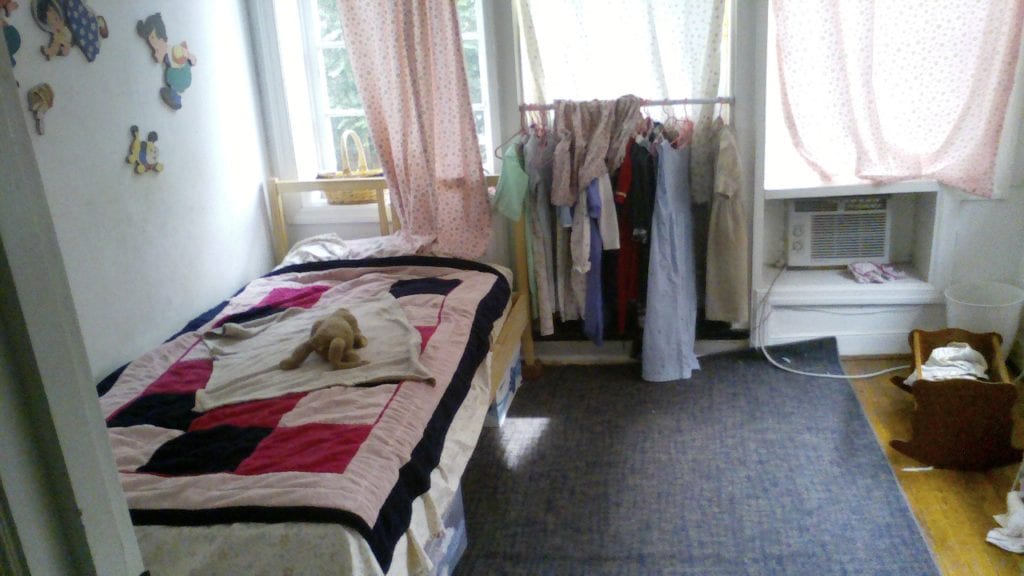 Su’s room the day she earned the full 16 points!

I’ve actually gone ahead and made a checklist for my room too. It is really helpful to be able run down a list and know I’ve hit the major points and that while not immaculate the room is neater. I also think I need to set a good example of a tidy room for the children….

Here’s a pdf of our bedroom checklists you can download and use. Clean Bedroom Checklist (1229 downloads)

2 Responses to Checklists and Tidy Rooms