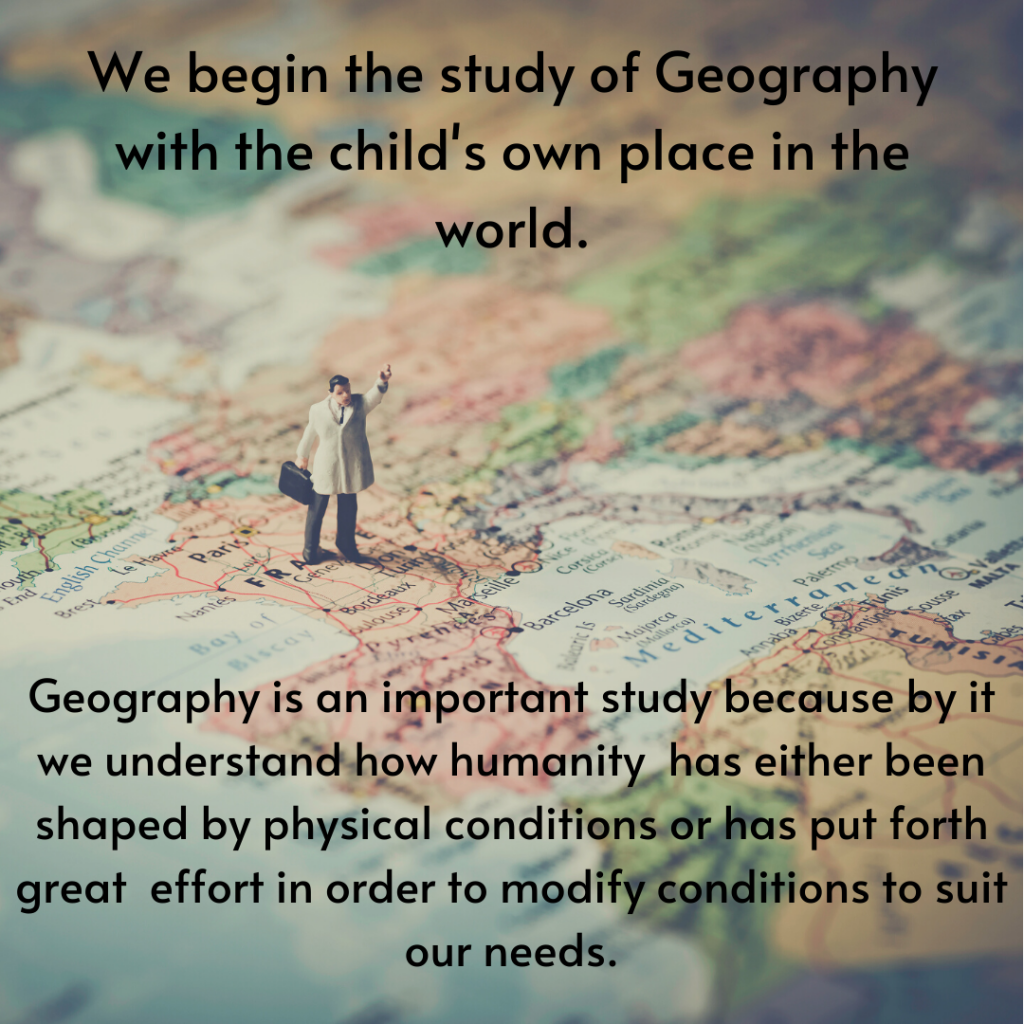 Geography is the study of places, so we begin by helping the child to observe his own places and learn how they relate to him and to each other and to begin to see how they shape what he does in each place.  Geography is an important study because in it we learn that the physical shapes of places changes what we are able to do in them and we learn that some physical places can be changed to better suit us. By first studying the geographical features of the Middle East we are easily able to see that Ancient Egypt flourished as it did because there was no great struggle for physical survival thanks to the renewal of the Nile and that the Ancient Greeks were a seafaring people because the sea was easier to navigate for trade than their rugged mountains.

It is easy in our modern age to discount the wrestling that took place between our ancestors and the land in which they lived. Recently, I was reading Little House in the Big Woods and Little House on the Prairie aloud to my littles and I noticed how much the Ingalls’ family migrations were tied to Pa’s desire to farm in a geography where he did not have to fight the land in order to survive. In the woods of Wisconsin, he had to first to cut down trees, then plow and plant around the stumps, removing what stones he could. All through the growing season he had to not only tend the crops themselves but also chops down the sprouts coming up from the stumps until they rotted enough that they could be pulled up and dragged out of the field.  His pleasure when he began to plow the sod in Kansas is such that Laura still remembered it decades later.

We tend to skip over the importance of that experience of geography because we don’t have the same struggles. In town especially we are isolated from the effects of climate and soil, as we are able to retreat into our homes and flip a switch to heat or cool them to our liking.  The study of geography helps to make us aware of the effects of physical features of the land in historic times and assists us to be more observant of our own physical surroundings.

Since we begin this study in the youngest years of formal schooling, it seems reasonable to begin with what the child knows best- his or her own place in the world- slowly expanding outwards as the child’s own horizon and understanding expands and at the same time adding skills and vocabulary with which to accurately describe what the child sees.

We begin with the home; asking the child to draw a picture of his own house and to tell something about it. If necessary to help him begin to tell we might ask a question like – “what color is your house?” but we are not looking for an accurate description here (how many rooms, what is each for and so on) but rather for what the child has allowed to make an impression on his mind or his imagination. What is important to the child and how does he make that importance known?  In these early years, we are learning the child as the child is learning to learn and we must be careful not to shape what the child is impressed by or loves by what we think a child of six should love or be impressed by.  “Children are born persons” and it is our task to recognize that essential personhood and gently guide the child to mold it through lessons, habit training, and home life so that when the child is grown he may indeed care deeply about the large room in which he has been set!

The child is studying the physical geography of his life and we are studying the spiritual geography of the child so that we can help him to “make the rough places a plain.” and we begin gently with a little lesson of ten or fifteen minutes. First a drawing in his notebook of his own home and then a little narration of his picture.  Later in the week we look at the picture again and he may add to it or do another picture to show other features that have been awakened in his mind by the first lesson. Or we might ask him to tell us about his home while we draw to his direction, which will probably produce much hilarity but also will begin his learning to describe accurately what he wishes others to understand. Again it is a short lesson but it stirs up the sediment of the brain to begin to look and to see and to tell.

“Education is the Science of Relations.”