Posted on November 20, 2011 by Kyndra Steinmann

Last week we made a decision to move Su into our bedroom and us into the office. As part of this project I decided to take Su shopping for curtain fabric. The little room used to be a sun-porch so nearly half of it is windows and since she’s always shared a room with her brother I want to make her first solo bedroom a little bit special.

Yesterday we left the boys with S and headed off to the fabric store.

I knew that her preference would be to have as much pink as possible, but this room will double as a guest room so I don’t want it to be too little girly.

We walked in, got a cart and started our search. The first thing she saw was some bright pink solid flannel.

“We could make curtains out of that.” she said with delight.

“Yes, we could but they wouldn’t hang properly that’s flannel. Also I want a print not just straight pink.”

So we headed over to the quilting section which is organized by color. She looked at several fabrics and then asked,

“Can I have black curtains?”

“I suppose but they would make your room kind of dark.”

She continued looking and found several nice pieces, all very bright and all with some element of pink. None of them worked though as they were either expensive or didn’t have enough on the bolt.

Finally we ended up at the clearance rack in the back of the store where we found these: 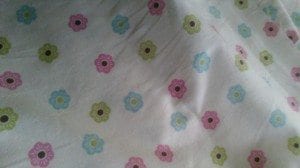 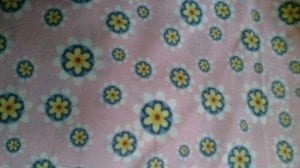 She liked the fabric, I liked the price and since neither bolt had enough fabric I’ll alternate them around the room (there are four windows) and make a pillow for her bed, and a blanket for her doll cradle out of the scraps. Altogether a satisfying Mother-Daughter Expedition.