What We Do on The Weekends…

Yesterday we went to Sam’s Club right at lunch time so I got the children hot dogs while S did the shopping. F was particularly pleased by the drink cups…. 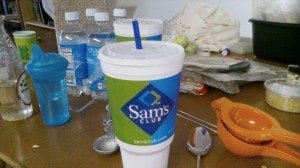 So today during naps he decided to make me a drink… 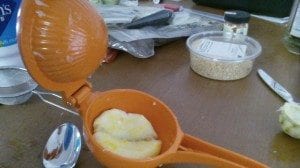 He squeezed a lemon with S’s new squeezer, and mixed the juice with water then brought it to me.

He took it back downstairs and fiddled with it, then asked me to taste it again. Still pretty awful, just weaker, he’s clearly added water but nothing else.

“Why don’t you ask Papa to help you with it, he’s good at drinks?”

So off he buzzed to S:

“Papa, I’m trying to make a lemon drink for Mama and it’s not balanced. I added water to it.”

So S suggested sugar syrup and ice and he ended up with a tolerable (weak) lemonade. What a boy!